Home » Jazz Articles » Chet Baker: It Could Happen To You: Chet Baker Sings

Chet Baker: It Could Happen To You: Chet Baker Sings

By David Rickert
January 25, 2003
Sign in to view read count 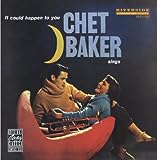 Chet Baker had a distinctive trumpet style that even Miles admired, but many may not know he was also quite accomplished as a singer. Judging by the cover (Baker’s good looks were always prominently featured on his releases), the A&R people at Riverside saw an opportunity to market Baker as a romantic crooner along the lines of Frank Sinatra or Nat King Cole. This is surprising, considering his fragile, colorless vocals certainly don’t immediately call to mind someone who could sing at all. Nevertheless, Baker’s haunting vocal delivery remains one of the most underrated pleasures in jazz.

Unlike the earlier Pacific releases, which featured Baker’s vocals and trumpet playing in equal measures, the 1958 record It Could Happen To You focuses mainly on vocals. Backed by a stellar East Coast rhythm section that glides over the changes like figure skaters (Drew in particular responds with delicate accompaniment), Baker delivers deeply moving renditions of standards. The best songs are ballads like “Everything Happens To Me” and “While My Lady Sleeps”, which are perfectly suited to Baker’s vulnerable delivery and are achingly beautiful, a soundtrack to rainy nights at home alone with a bottle of Scotch. The up-tempo numbers feature more trumpet soloing and are charged with mellow phrasing and a keen sense of melody, demonstrating why Baker was admired by so many of his peers.

Few singers also double on a horn, but Baker shows how successfully it could be done, blowing and singing both complementing each other as part of a compelling conception. Newly remastered, It Could Happen To You is clearly a vocal jazz classic.