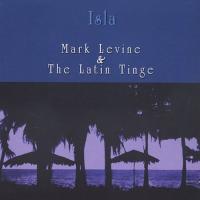 Pianist/educator Mark Levine is a master of straight-ahead Latin jazz. The members of his Latin Tinge quartet all share his orientation towards modern bop, enhanced by a remarkable ability to lay down a pretty mean clave beat. On Isla , the group tackles compositions by Cedar Walton and Kenny Garrett as well as standards of both the Latin and popular songbook variety.

On Garrett's "Ain't Nothing But the Blues," the tempo is relaxed and the mood keeps cool. Levine's playing here is sweet and soulful, while the percussion duo of Michael Spiro and Paul van Wageningen erects a sturdy rhythmic structure. Dizzy Gillespie's "Con Alma" is bracketed by excerpts from a traditional Vietnamese tune. And the group effectively transforms "Tea For Two," that oldest of chestnuts, into a vehicle for Levine's smoothly gliding lines. These tunes are typical of this outing, which overall is less aggressive than Levine's previous release, Serengeti.

The only real burner on the disc is Walton's "Black." This is also one of the most engaging cuts, as it offers large tracts of space to the hot percussion as well as Levine's rich chords and dizzying flights of fancy.

The group receives some additional support from Harvey Wainapel, who contributes a moody clarinet line to "Isla" and a lyrically reflective soprano saxophone to "Seis Pa'Chuito." These help to break things up, but also expose the disc's missing element. A little more variety would make the disc better suited to intensive listening. For most real-world listening situations, however, Isla is a finely produced album that should have broad appeal.