By GENO THACKARA
January 6, 2018
Sign in to view read count 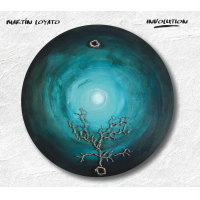 Have you ever wondered what directions Miles Davis might have taken if he hadn't retired from his electric fusion period in mid-1975? Perhaps he could have shifted his influences even farther east, traded the odd cocaine binge for an opium habit, and gradually replaced all the heavily layered African rhythms with some more minimalist drones out of the middle East. We can never know for sure how it would have sounded, but decades removed in time and technology, Involution takes up just that kind of challenge with relish.

Martin Loyato wouldn't resort to merely aping the Chief's stylings, of course, but instead takes that source as one guidepost among many others: Jon Hassell's cross-cultural "Fourth World" philosophy, classical minimalism, an avant-garde ear for textures and a jazzy feel for improvisational groove all make part of the melange. Featuring a cast of players spanning five continents, this is an hour of otherworldly trance where light electronics coexist with Indian hand percussion, fusion keyboards and Chinese chimes. Languid as it is, the lack of speed never means a lack of impact; instead it's an object lesson in the virtues of patience.

Saxophone and oud make equal ingredients with wispy flute and the wordless singing of an almost-angelic choir. Loyato wahs his way with a mute over slow horns in the club-noir title track, takes a sharp turn into late-night desert trance with reverent Arabic chanting in the next, then decides it's time for a lofty electric guitar solo before switching to some skittering electro-beats. This is the kind of stuff that the often-cheapened term "world music" shoots for but so rarely achieves: a unified whole that simply forgets the idea of boundaries altogether.