BY SAMUEL STROUP
January 24, 2018
Sign in to view read count 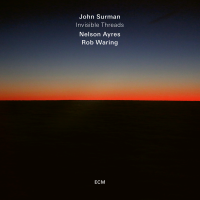 Half a century into his musical career, English reed player John Surman continues to find outlets to explore a wide variety of introspective compositions. Invisible Threads, out on ECM, finds Surman exploring folk and world music, accompanied by pianist Nelson Ayres and mallet percussionist Rob Waring. The album features Surman's woodwind melodies bouncing atop piano and vibraphone/marimba patterns so smoothly that it becomes almost impossible to tell what is improvised and what is not.

Surman's trio is an ensemble of the world, with Ayers hailing from Brazil and Waring from Oslo via New York. Both players are accomplished composers and performers in their own right, and bring unique flavor to Surman's sonic table. The small and well-entwined rhythm section, beneath Manfred Eicher's ethereal production, are reminiscent of Chick Corea and Gary Burton's collaboration on Crystal Silence. Waring and Ayres seem to surround Surman's sound, engulfing and dis-engulfing his fluttering tone. The bass clarinet becomes barely more than a breath on "On Still Waters," allowing Waring and Ayers to paint the scenery. The vibes ring as Waring plays them with a bow, his sound reflecting the shimmering imagery that the song's title evokes.

At 12 tracks—11 of which are Surman's own compositions—the album would begin to feel slightly long if not for the Nelson Ayres tune, "Summer Song" breaking them up. The singable melody and the playful energy of the song provide something of a departure from Surman's slow-tempoed and pensive pieces. Still, the tune's sax trills and bouncing piano are right at home on "Threads." "Summer Song" finds a musical and seasonal juxtaposition in the second track, "Autumn Nocturne," a quick and esoteric tango whose melody is shared between vibraphone and piano. The nocturne sets up a sense of mystery, a foreshadowing of the curious music that is yet to come on the record.

This band of veteran musicians achieves what it sets out to do on Invisible Threads, mixing their improvisational skill with the rhythmic intricacies that make the album's songs unique. The trio's light sound never becomes flimsy, each member occupying his varying amount of authority, moment by moment. Surman masterfully leads the group through his exercises in cohesion in the flowing and pulsing music.

In constant search of search of something new / cool / old / loud / weird / pretty to listen to.