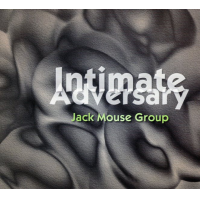 The great Spanish cellist Pablo Casals would sometimes refer to his instrument as his "intimate adversary." Illinois drummer/composer Jack Mouse has borrowed the term as title for a laid-back, carefully orchestrated piece, which he plans as the first movement of a two-part suite. It's the most ambitious number on this, the album of the same name, and some of the ensemble parts have an appropriately Spanish tinge to them.

Mouse draws on a wide variety of sources when composing. The opening number, "Barney's Fife," was inspired by The Andy Griffith Show, a U.S. TV situation comedy beloved of Middle America. It ran on CBS from 1960 to 1968, starting off in black and white then going over to color. It steered clear of controversial cultural aspects of the period, such as racism and segregation, by simply avoiding engaging with them. Mouse himself suffers from no such blinkered outlook. Of "Old, New & Used Testaments," the second song on the album, he says, "There were two African American churches in the town where I grew up. I used to sit outside and enjoy listening to their choir practices." There's a shy, nostalgic gospel feel to the number that's very attractive. John McLean (guitar), Art Davis (trumpet) and Scott Robinson (tenor saxophone) all shine.

"Nineteen Sixty-five" was the year Mouse wrote his first tune and this is it, reminiscent of the Frank Sinatra hit "I Thought About You" off of his 1956 Capitol album Songs For Swingin' Lovers. McLean is first out, followed by a muted Davis, before Robinson takes charge. "Twas Never Thus" is slow and dreamy, based on the harmonic changes of one of Mouse's favorite numbers, "The Thrill Is Gone," though with—as he puts it—"a few strategically placed key changes."

"Jacomo" was the nickname by which Mouse was known by his high-school band director. It's a jaunty blues with a bridge. For "Three Heads Are Better Than One" Mouse sent the band a rhythmic line and asked them to apply pitches of their choice over blues changes.

"Three Free" was collectively improvised by Mouse, Robinson and Bob Bowman on bass as the recording session ended and Mouse retreated to the telly for another Andy Griffith re-run.