Home » Jazz Articles » The Opposite: Interwined 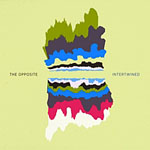 This Swedish sextet was initiated by Malmö-based French keyboardist Loïc Dequidt and drummer Peter Nilsson—the latter one of the leaders of the Malmö-based Kopasetic Label's musicians collective, which investigates improvisational interplay through a democratic, collective group approach based on a dynamic rhythmic concepts that lean on Indian, African and Cuban traditions. Their instincts proved right since the group's debut, Intertwined, recently won "Best Jazz Album of 2009" at the Swedish indie awards, Manifestgalan.

The immediate references that come to mind are '70s-era Miles Davis electric outfits, early Weather Report and Sun Ra Arkestra in its more coherent moments. This ensemble has, indeed, a strong and focused rhythmic identity and organic fluidity, but without the bombast excess of most fusion outfits. There is also a clear feeling of joyful playfulness, with healthy dose of humor and eccentric outbursts more typical of Fred Frith's ensembles. All sextet members—all active in Malmö's fertile music scene—sound mature, possessing distinct musical voices, especially guitarist Samuel Hällkvist, who sound as if he is taking Marc Ducret's angular and distorted lines a step further, and the assured playing of alto saxophonist Marcelo Gabard Pazos...and, of course, the powerhouse drumming of Nilsson.

All six compositions—credited to Dequidt and Hällkvist with the exception of one collective composition by the entire group—feature complex turns and cues, without being too dense. Dequidt's "I Said Haha" is one of the most intense, featuring the sextet's tight interplay and immediate role and solo changing. The free-improv "Seau d'air" is an arresting example how a spare improvisation and distant jagged playing by Hällkvist, Paazos can gel naturally with Dequidt and Nilsson's melodic lines, later crystallizing into a multilayered and cohesive collective sound. Hällkvist's "Les délices de la mer" and the closing "Switch Foot Pogo" reference clearly Weather Report and even Keith Jarrett's American quartet with its captivating shiny themes and infectious grooves.

This a highly original sextet, wise enough to balance form and freedom, intellect and emotion, and childish joy of playfulness, with tight and focus compositional delivery.