By C. Michael Bailey
November 10, 2010
Sign in to view read count
Track review of "Salt of the Earth" 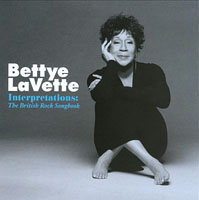 Cross Nina Simone with Tina Turner and you get Bettye LaVette. Finally receiving the attention she deserves, LaVette finds herself on a most receptive world stage. LaVette appeared at the 2008 Kennedy Center Honors, in tribute to The Who's Peter Townsend and Roger Daltrey, singing "Love Reign O'er Me," from Quadrophenia (Polydor, 1979). Video of the performance shows a stunned and humble Townsend and Daltrey, hearing their iconic song sung by an icon. Interpretations is a bold and are breathtaking concept album of LaVette interpreting British rock songs from the '60s and '70s, transforming Joe Cocker's "Don't Let Me Be Misunderstood," Led Zeppelin's "All of My Love," Pink Floyd's "Wish You Were Here," and Paul McCartney's "Maybe I'm Amazed." Instead of England repackaging American music and feeding it back to us, LaVette takes British music to a higher level and flogs them with it.

LaVette's most integrated interpretation is of The Rolling Stones' "Salt of the Earth," from Beggars Banquet (London, 1968). LaVette divines a truckload of Gospel soul while fully channeling The Staples Singers by way of The Impressions, and demonstrating the connection between Mick Jagger and Curtis Mayfield. A Fender Rhodes and slide guitar recall Aretha Franklin's "The Weight" and The Crusaders' "Hard Times," while forging a new identity in her own image for the song. Ending with a gospel choir, LaVette tips her hat to "Tumblin' Dice" and "Shine a Light." Authentic music rendered authentically: LaVette's light is no longer hidden beneath a basket.