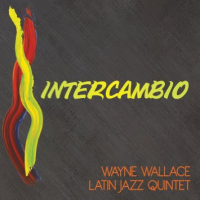 The music that commenced as accompaniment to ancestral rituals and gained its popularity in dancehalls and ballrooms, has come of age. Latin infused jazz, has been steadily evolving since the African drums came to the Caribbean, and melded with European musical influences. Trombonist, composer, arranger, and producer Wayne Wallace is aptly tuned into this evolutionary process and presents Intercambio, a cross cultural interaction of musical counterpoint.

With his Latin Jazz Quintet—and its exemplary members—Wallace has taken a sophisticated creative approach to this music while maintaining the essential dance orientation so vital in its structure. "Casa Del Sol," one of several original compositions, is a modal mambo dedication to pianist Eddie Palmieri, who has been on the cusp of progression since his early salsa recordings. Jazz trombone legend J.J. Johnson penned "Shutterbug," originally a blues piece, which Wallace converted into a contrapuntal brass extravaganza with Dan Coffman, Brennan Johns, and Sean Weber joining him on the trombones.

Cuba, with its significant contribution, is well represented on selected tracks, one being an interesting interpretation of "Solar," by Miles Davis, complete with an inviting vocal chorus. With jazz icon John Coltrane in mind, his "Equinox," maintains a primordial African Yoruba inclination, featuring percussion master Michael Spiro at the forefront with the rhythmic pulsation of batá drums. The Afro-Cuban religious traditions, which kept the music going forward with its comparsas, or carnival processions, are at the roots of "Guarachando," and the inevitable Cuban cha-cha-cha is melded with Brazilian samba on "Como Vai."

The Puerto Rican bomba is the folkloric foundation for "Algo Bueno," augmented by the steel drums of Joe Galvin, and superb piano montuno work of Murray Low. Another of Wallace's imaginative numbers, "Timbázo," incorporates the timba beat into urban funk with dramatic results. Then it's back to the Palladium and other New York City dance venues with "Heart and Soul." Though penned in 1938, this Hoagy Carmichael standard is as relevant today as ever, and it's revitalized with a unique salsa oriented spin. Kudos on this cut, as well as throughout the production to bassist David Belove, and drummer Colin Douglas for maintaining the course throughout the demanding sessions.

After almost an hour of dynamic rhythmic currents, the group closes the set with a Miles Davis ballad, "Circle." A stimulating string quartet is highlighted on this song, as Wallace takes a leisurely solo back through time and space. A fitting end to a cerebral project that achieved the intended outcome of interacting with the different elements and inspirations at the core of Afro-Caribbean music, blending into the amalgamation which is jazz.