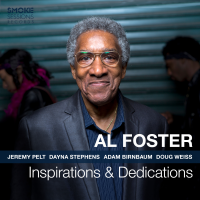 On paper Al Foster's resume as a supporting artist reads better than most other jazz drummers. He's recorded albums with Dexter Gordon, Art Pepper, Frank Morgan, Sonny Rollins, McCoy Tyner, among a plethora of others. Chances are, those who aren't familiar with his name have heard him somewhere, and for the first time since 2002, they can hear him on Inspirations And Dedications as a band leader.

As its title suggests, the album is a somewhat autobiographical release. With its 66-minute runtime divided into 13 tracks, the disc is lengthy without becoming bloated. Foster's quintet is a top-tier group of musicians, including trumpeter Jeremy Pelt, saxophonist Dayna Stephens, pianist Adam Birnbaum, and bassist Doug Weiss. The group plays well together, offering a pleasant sound which pushes the lengthy album along at a quick pace, their consistency never allowing for a lull. Rather than featuring a standout single, each song on this crowded release contributes more to a whole. At its finish, Inspirations and Dedications seems not to be a somber reflection on a life lived, but a celebration of it.

Eight of the aforementioned dedications take the form of family. "Simone's Dance" and "Samba de Michelle" feature some of his heaviest drum work on this release, with the latter being a swinging cymbal-driven tune. "Kierra" offers a cool, mellow vibe, while "Song For Monique" is a new composition sounding as if it could have been lifted from the early 1960s. Dayna Stephens leads the group through a catchy melody, while Jeremy Pelt seizes an opportunity to solo. The drummer's now classic "Bonnie Rose," a tribute to his wife of over 40 years, receives a more mellow reimagining led by Birnbaum and Weiss, contrasting starkly with the more energetic treatment it received on Chris Potter's Pure (Concord, 1994).

Foster and Birnbaum condense the drummer's 1997 composition "Brandyn" into a brief duet prelude to "Our Son," a grief-soaked elegy for the child he lost in 2017. Though these two songs comprise under four minutes of the album's runtime, they serve as an emotional counterbalance to the rest of Inspirations and Dedications. The quintet doesn't pull their punches here, and their sincerity lends authenticity to the entire production.

Self-referential yet still humble, Foster also penned a composition in his own name, titled "Aloysius." The tune opens with an pensive drum solo before Stephens takes up the melody. Bookending the album are homages to the drummer's 1980s bandmates. Herbie Hancock's "Cantalope Island" opens things up, while he later revisits Miles Davis' "Jean-Pierre," which he played with Davis' quintet on the trumpeter's Grammy-winning We Want Miles (Columbia, 1982). The latter retains just enough of the original's attitude to be an upbeat finale.

Al Foster doesn't use Inspirations and Dedications to solidify his position as one of jazz's legendary drummers. He doesn't have to. Instead, he utilizes the album to pay homage to his history within the genre. His friends, his family, and his colleagues all receive treatment, and now more than ever, it becomes apparent how great the breadth of his footprint has been.