By Bruce Lindsay
August 6, 2013
Sign in to view read count 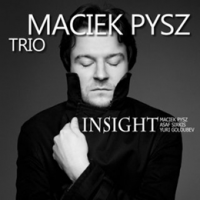 Insight, the debut recording from guitarist Maciek Pysz and his trio, is a jazz album from Britain. Well, it's released on a British label, funded with the support of Arts Council England and Jazz Services, and performed by British-based musicians. However, Pysz is from Poland, bassist Yuri Goloubev is Russian, and drummer Asaf Sirkis (who plays much of the time on a collection of hand drums) hails from Israel; the album was recorded at the famed Artesuono studios in Italy during February 2013.

So, Insight is an album from Britain. But it also demonstrates the rich mix of players that inhabit the British jazz scene, a mix that's drawn from the rest of Europe and beyond, that takes its musical inspirations from across the globe and brings them together to create original and delightful new works. The Maciek Pysz Trio played together for three years prior to recording Insight, and this collection of Pysz's original compositions benefits greatly from the musical understanding that three-0year experience has helped to create.

There are obvious similarities between Psyz and Swiss guitarist Nicolas Meier. Both are based in the UK and favor a crystal clear acoustic sound, delicate yet precise finger-work and fluid melodies. However, while Meier's music takes much of its inspiration from Turkey—his wife's home country—Pysz looks to Spain and Latin America for creative ideas. Sirkis has played with both guitarists: his experience with Meier may have helped him to develop the highly sympathetic percussion style he displays here.

Pysz overdubs lead and rhythm guitar on much of the album, creating a fuller, richer sound in so doing. "Those Days" is a fine opening track: Pysz' lead lines are forceful and upbeat, his rhythm playing full-toned. Pysz' strength is also apparent on "Amici," co-written by Pysz and guitarist Gianluca Corona. Sirkis' vibrant percussion underpins "Lost In London," a slow, considered, tune where the guitar takes on a slightly softer tone. On the title track, apparently inspired by Chick Corea, Pysz deftly mixes classical and flamenco while Goloubev and Sirkis provide a tight rhythmic foundation.

The gorgeous ballad "Moody Leaf" showcases Goloubev's melodic arco bass playing: it's featured again on "Steps Of Time," but this time its beauty is more downbeat and melancholy. There are times, for example on "Under The Sky," when the music moves towards an easy listening smoothness: but Sirkis and Goloubev always retain just a little bit of bite in their playing, ensuring that the tune never slides too far towards blandness.

Insight is an album that readily conjures images of warm, sun-kissed landscapes; it is a record that for the most part speaks of relaxed and comforting places.