By Friedrich Kunzmann
February 15, 2018
Sign in to view read count 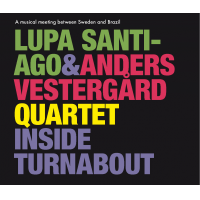 On their second collaboration, following 2015's Lisbon Sessions , Brazilian guitarist Lupa Santiago and Swedish drummer Anders Vestergård team up with a different set of sidemen, featuring, among others, Lupa's longtime collaborator and fellow countryman Rodrigo Ursaia on sax. Inside Turnabout features compositions by the three above mentioned protagonists and sees these seamlessly combining Latin rhythms with various hybrid approaches in a bed of bop harmonies and rich melodies.

What was initially intended as a reconditioning of the set presented during the touring of their debut offering turned into an all new collaboration of creating all new music, to which the natural genesis becomes evident as soon as the needle finds the first and title track of the record. Starting off to some speed, wide guitar voicings fittingly accompanied by thickly layered cymbal crashes give way to the exposition, led by guitar and sax in unison. Lupa doesn't hesitate to relieve the saxophone of its melodic duties by soloing with strong and detailed references to the main theme, expressed by means of imitation and inversion. Rodrigo follows suit and blows refined lines, likewise swaying near the realms of the main melody.

The trait of never straying too far from the main harmonic and melodic context is adopted across the entire album and finds its counterpoise in the reverb-heavy production, which resounds aptly adapted to Lupa's already reverb-heavy guitar tone, making for highly prominent comping.

His tone and singular phraseology is the main vehicle driving the record and especially striking on "New Houser." Here the group loosens up and follows their more adventurous side. The smoky melody, based on a gypsy minor scale, is diligently harmonized, giving Rodrigo and Lupa plenty of harmonic and melodic choices to juggle with. Lupa takes the lead in most dynamic fashion, first relying on the already established tone before switching into synthesizer gear, truly exhausting the harmonic changes with an octave-pedal and further overtones.

The ballad "Me perdi" is another highlight, demonstrating that these players know how to keep the tension high while at the same time playing it slow. Room and space are filled with a minimalistic approach, charmingly contemplating the lost.

While the quartet does occasionally tend to play it a tad too safe by confining itself to rather conventional dialogues and structures, this nevertheless remains an entertaining showcase of immaculate musicianship, due, amongst other things, to the dynamic interplay between the members, who's meticulous chemistry is evident from start to finish.