By JACK BOWERS
September 3, 2017
Sign in to view read count 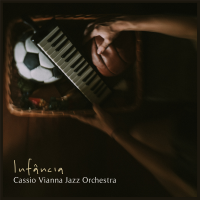 As composer / arranger Cassio Vianna was born and raised in Rio de Janeiro, an argument could be made that there is rhythm in his genes. The notion is underscored on Infancia, Vianna's debut recording as leader of his well-schooled Jazz Orchestra, a bright and thematic excursion on which the seductive rhythms of his native Brazil carry the day.

Infancia (Portuguese for "childhood") opens with a handsome three-part suite focused on that singular time of life: "The Nomad" (in other words, a child must go where his / her parents go); "Distant Dreams" (the awakening of a child's interest in music and other pursuits); and "Baiao Moderno" (the ways in which children find creative ways to entertain themselves and survive, especially in times of social unrest). Vianna wrote and arranged the suite, as he did every other number, starting with the enchanting jazz waltz "April Song" and continuing through "Belmont," "Amizade" (friendship), "For the Rise of a New Day" and "Rio Vermelho" (Colorado River).

"Belmont" (written for Vianna's friend Josue Belmont) opens slowly before gaining momentum behind strong solos by flugel Brad Goode and tenor Darrel Watson, while "Amizade," the album's "jazziest" piece, drives earnestly forward to underscore decisive statements by tenor Kenyon Brenner, alto Chang Su and drummer Jim White. A number of adjectives could be used to describe "For the Rise of a New Day," not the least of which is picturesque. As Vianna writes, it is his attempt to "create a soundtrack for the cycle of a day in any big city in the world." It's an ambitious enterprise, secured by Vianna's impressive chart, Tom Amend's lyrical piano and Mike Conrad's forceful trombone. Vianna opens the floodgates on "Rio Vermelho," a fast-moving opus written in the fiery frevo style favored in northeastern Brazil. Conrad, Watson, White, guitarist Matt Landon and trumpeter David Moore are the stalwart soloists.

Vianna's seventeen-piece orchestra is letter-perfect, the soloists (who also include trombonist Zach Rich and alto Sam Hesch on "Distant Dreams") poised and resourceful. Add Vianna's admirable charts, blend with care and Infancia is an unequivocal winner.