By Andrey Henkin
March 9, 2007
Sign in to view read count 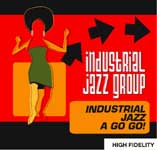 For those expecting to read about Ministry tunes played by full trumpet sections, stop right now. The Industrial Jazz Group has absolutely nothing to do with industrial music per se. I might posit that the adjective refers to an almost assembly line-like amalgamation of every known big band style into one mechagodzilla that destroys Tokyo.

The Industrial Jazz Group was founded in 2000 by Andrew Durkin, a composer, pianist and occasional percussionist. This is the group's fourth album, after its self-released debut and two releases on the Innova label.

At least instrumentally, the group is your typical modern big band, heavy on the horns and buoyed by electric bass and busy drums. And its arrangements are also typical, if by that one means eclectic, energetic and eccentric. Young big bands have absorbed the ups and downs of the genre—its heyday, its sad decline, its subversion by the avant-garde, its brief relationship with rock, its creaky old age. They then ignore all of that and try to do something new and interesting.

On the group's last album, the prevailing aesthetic was that of Frank Zappa during his 1972 Waka/Jawaka and The Grand Wazoo period (no surprise for a band from Los Angeles). For Industrial Jazz A Go Go!, Zappa still hovers, but now more abstractly. The album is a collection of deliciously seditious charts that scoff at once-noble music forms like doo-wop, Western soundtracks and game show themes.

It may all sound like good fun, but like Zappa, Durkin understands that humor and pluck only get you so far. His harmonic sense is advanced and some of his horn parts come out quite beautifully. Think of it as dance music you don't dance to.