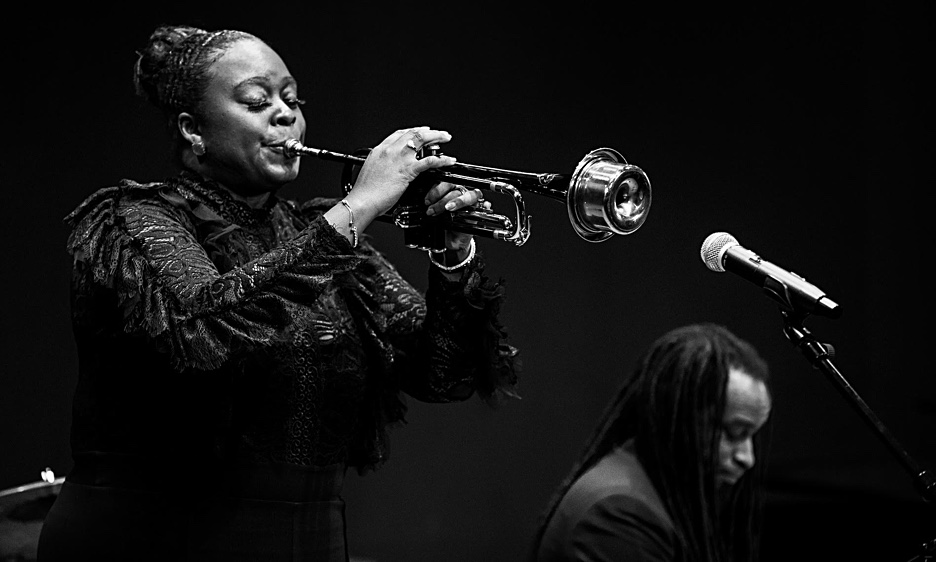 Producer and Co-founder Eileen Sherman started the evening December 8th, at the Bruno Walter Auditorium at Lincoln Center by promising a show like no other in terms of diversity of styles, races, religion and talent. The Indie Collaborative did not disappoint with a coming together of Emmy, Grammy and Chart-Topping Billboard Independent artists for an interactive evening of beautiful spoken sung and musically accompanied magic to salute the holidays.

And what a salute? The Indie Collaborative is more than 2,000 musicians from around the globe. IC artists represent every genre of music from pop to rock and jazz classical, musical theater, New Age, children's world, and country. Many are award winning artists with Grammys, Tonys, and Emmys.

Like a diaspora of musical artistry, the Indie Collaborative spread its talent before the audience at the Bruno Walter Auditorium at Lincoln Center for a "feel good" evening of interfaith groove accompanied by excellent musicianship.

First up was Syreeta Thompson, also known as the "Trumpet Lady," who performed her own musical arrangement of "In His Presence," and "Blow Your Horn;" which involved the audience in a call and response encouraging Ms. Thompson to "Blow your Horn Girl, Blow Your Horn." Accompanying her on the piano was Mr. Alex Otey, and a surprise guest, Keith Middleton who played percussion. The ensemble worked beautifully and was a great kick off to the 90-minute show.

Next on the line-up was Joanne Lazzaro an amazing classically trained world flautist who played a beautiful composition by Eric Baum from the album suite Esmerelda for Flute and Piano. She was joined on piano by the smooth and mesmerizing Charu Suri. Ms. Lazzaro is the founder of the Los Angeles World Flute Circle and the Principal Flute of Beach Cities Symphony, in addition to being a freelance performer. Her performance did not disappoint this evening. It was breathtakingly beautiful.

Then Charu Suri performed a song from her most recent album Book of Ragas Vol. 2, accompanied by Falsa on Raga vocals and Jesse Gerbasi on drums. The tune was hypnotic, hauntingly, and mesmerizingly melodic, and the crowd appreciated it with cheers and applause, even though it was in another language. Suri is the first Indian-born-female jazz composer and performer to premiere her work at Carnegie Hall. One of the tracks on her Book of Ragas Vol. 2 album was recently sold as an NFT, yet another first for the brilliant piano prodigy.

Levels performed the moving and crowd interactive, "Feels Good," next, led by Keith Middleton who wrote the music and lyrics to this percussion heavy and moving tune. Middleton knows quite a bit about moving, having won acclaim in the award winning, off-Broadway STOMP. He kicked a few steps for the crowd which drew loud response. Also worthy of note, is the silky-smooth voice of Aaron Marcellus who joined Middleton is this tune's vocals. Middleton and Marcellus were brilliantly and rhythmically accompanied by Smithsoneon on Drums, DeVaughn Denegall on bass, with Jeff Huart on Piano. Levels covers various genres in their musical repertoire including R&B, hip-hop, progressive rock, Latin and afro-beat, and much of that came out in "Feels Good.."

Next up in Mr. Maloy Smith's lineup was Nicole Zuraitis, who I found to be a very "Broadway" styled performer. Nicole Zuraitis is Grammy nominated artist and the winner of the 2021 American Traditions Vocal Competition, and vocalist for the Birdland Big Band. She serenaded the audience with peppy, happy tunes including "It's the Thought That Counts, Shades of Grey" and my favorite, "The Coffee Song" which she dedicated and composed for her Drummer (and Barista) husband, and fellow Grammy nominee, Dan Pugach.

The next selection was a stunning Broadway styled song which celebrated the Hanukah tradition. It was the performance of a song by the Bluestone Sisters entitled, "My Mother's Menorah." The sisters are creators of songs in various award-winning theater productions and albums. "My Mother's Menorah" was beautifully arranged and played by the brilliant violin virtuoso, Kelly Hall-Tompkins, a trail-blazing soloist and chamber musician who was "the" Fiddler violin soloist of "Fiddler on the Roof," in the Bartlett Sher production. The song was also vocalized amazingly by the brilliant actress and songstress Rachel York, who was stunning in the feeling and emotional story of the song, based on the only valued possession of its owner. According to the program, Ms. York just returned from London where she was the star of the smash hit, "Anything Goes."

Perhaps the happiest music of the evening was that of the Ukulele player and singer, Lucy Kalantari, and no doubt, since she is a Grammy Award winning creator of children's music. Her album All the Sounds, won the Grammy award for best children's album. She performs with skillful big bass accompaniment of Larry Cooke. At one point she brought up her son and a two of his friends on stage to dance to the music of "It's the Holidays!" It's Snowing" and the English-Spanish bilingual "Una Gran Familia"

Jazz vocalist Grace Garland came on the stage next to perform her own music and lyrics in the sound "Single Mingle Jingle," while the ivories were tickled by none other than the fantastic jazz pianist and well-known accompanist, Robin Radus. Ms. Garland's vocals were animated by her energetic and soulful demeanor as she bounded about the stage.

The evening performance was very brilliantly adorned with a tribute to Kwanzaa with the vocal and spoken word talents of Yocontalie Jackson, who beautifully sang and recited "Kwanzaa's Pure Light," with the piano and trumpet assistance of Alex Otey who arranged this piece written by the Bluestone Sisters, and also called upon the many talents of Keith Middleton who played drum and also sang vocals.

Then Grant Maloy Smith, the evening's MC and co-producer pulled out his guitar and sang two songs of his own, "On this Day," and "Christmas Eve in Times Square;" which were well played and well executed country western songs with the final one being about New York City at holiday time. The crowd responded and I thought the essence and feeling of the city during this special time of the year, were beautifully captured by Maloy Smith.

And to end this special and multi-varied performance the entire line-up of the show came back out on stage to sing a group song by Maloy Smith entitled "We'll stay Together." The audience was invited to join in, and this spirited audience did as the song's lyrics were on the back of the program.


It was clear to those present that this incredible All-Star lineup of Global talent could only be amassed in a place like New York. The show certainly brought on the holiday cheer in a very beautiful and inclusive manner. The Indie Collaborative seeks other artists to join its artistic ranks.