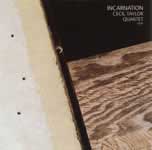 The quartet commences the set with a feeling-out process, greasing the pot prior to an onslaught of intertwining call-and-response choruses. And as many of us would surmise, Taylor and his quartet go climactically fast and furious for the jugular. The pianist peppers and accentuates his bandmates' rumbling and tumbling sense of forward motion. Then again, Douglas' wah-wah guitar choruses cast a bizarre edge to Taylor's avant-garde canon.

On "Carnation, cellist Tristan Honsiger's oscillating arco passages establish the framework for the musicians' capacious dialogues of expansion and contraction. At times Taylor tempers the hard-hitting flow with sublime chord clusters, periodically toggling matters down to a near-whisper. Overall, this recording is one his more compelling dates in recent years. It's partly about frenetic group interaction, shaded with Douglas' occasional implementations of mainstream R&B. Recommended.