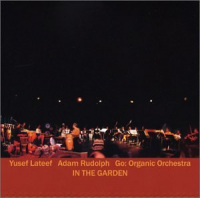 Slip this disc into your player and be prepared to be transported into the skin of the vibrant drum and the unfettered melody of water and wind singing in primeval harmony with the earth. And let us not forget the Babel of voices—man, first reveling in the glory of the earth’s perfect design, but soon lamenting the impending destruction of its perfect balance. Be warned, this is not just Eden, but the time and continuum of its creation. It is, therefore, the act of creation, a period of fascination of the beauty of the dissonance in symmetry, and the inevitable disturbance of the perfect nature of the earth’s design.

In the Garden, Adam Rudolph’s and Yusef Lateef’s lyric/rhythmic suite is just that: a tribute to the impeccable design of the earth. It has been performed by Rudolph’s Go: Organic Orchestra. The 23-piece orchestra is divided into two sections and features Adam Rudolph (leading the percussion section) with a dazzling display on a myriad of drums—both rare and familiar—and the second woodwind section that features leader and legend Yusef Lateef on reeds and woodwinds.

Because Rudolph (by his own admission) has "refused" to conform to the accepted nature and form of western music, he is able to melt technique, expression and into a sense of timing that virtually mirrors the heartbeat of every sensuous element of true nature! So Rudolph plays "the earth" while Lateef, weaving lines and phrases into a wonderful tapestry of sound plays the voices that inhabit the Garden of perfection.

It is almost impossible to separate sections of the suite, with the goal of recommending one or the other. Nevertheless it is worth mentioning “Little Tree” that is both tender and ponderous as the piece grows to its conclusion with the Babel of voices (man fighting over...) mentioned earlier. This is an exquisite opening to the composition and sets the tone for every other section to follow.

As a result, even darker sections (“Morphic Resonance,” “Root Pressure,” and the ultimate track “Chaotic Attractors”) become eminently accessible, even to the ear untrained in such modern impressionism. The short duet between Rudolph and Lateef on “Nanna” (Read that as: Sumerian god of the moon, the counterpart of the Akkadian god, Sin) revels in its own muscularity of tone and rhythm and perfectly mirrors the robust nature of mythic creatures (created by early man). And “Amanita” featured a pulsating rhythm section, while Lateef soars like a celestial artisan weaving over and under the rhythmic bed of music!

With this piece of virtually completely improvised music, Rudolph and Lateef have created a magnum opus, fit for gods and kings and every ordinary listener of contemporary music. Is it jazz in Ken Burns' sense of the term? Who cares! It pulsates and invites feet to dance and the mind to think about what might have been—if only we’d cared enough!