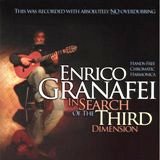 Granafei is a graduate of the Conservatory of L'Aquina in Italy and began working as a classical guitarist. After hearing a friend's recording of Bill Evans' Affinity (Warner Brothers, 1978), which featured Toots Thielemans on chromatic harmonica, Granafei taught himself to play the instrument. He then moved to New York, where he became involved in the jazz scene. He later obtained a Master's Degree from the Manhattan School of Music, where he was Toots Thielemans' only student in Jazz Performance.

In 2002, Granafei met inventor Vern Smith who had patented a hands-free chromatic harmonica which could be played by a musician who would be able to maneuver a switch by using his lips. Prior to that Bob Dylan was the image of a harmonica player who simultaneously played guitar, performing on a simple diatonic harmonica.

In Search of the Third Dimension begs comparison to Thielemans albums where the legendary harmonicist has played in a duo setting with guitarists like Oscar Castro-Neves. With the exception of two tunes, the music is very familiar fare coming from first wave Bossa Nova standards and songs from the Great America Songbook. Typically, Granafei first plays the melody on the harmonica and then improvises on it. In some instances the guitar is also used as a solo instrument.

The addition of Milt Jackson's "Bags' Groove" and Benny Carter's "Only Trust Your Heart" is most welcome, and on the former Granafei sinks his teeth into the vibraphonist's familiar riff. Throwing in yet another talent, Granafei also sings on two tracks. On a mid-tempo version of "You'd Be So Nice to Come Home To," Granafei displays a pleasant Harry Connick Jr-type vocal. At the break, he goes into an attenuated scat section and accelerates the tempo accordingly. For the concluding original, "Calabrossa," Granafei sings in Portuguese, yet another unexpected treat that sounds quite convincing.

Out Of Nowhere; Meditation; Autumn Leaves; You'd Be So Nice To Come Home To; Only Trust Your Heart; Bag's Groove; The Shadow Of Your Smile; Wave; Favors; Calabrossa.

Title: In Search Of The Third Dimension | Year Released: 2008 | Record Label: Self Produced