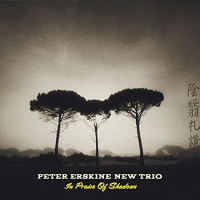 Expecting the delicately brooding pastel hues of his piano trio recordings for ECM Records, my socks were pleasantly knocked off from the git-go by Peter Erskine's New Trio. In Praise of Shadows opens with a slyly sweet, reggae-infused rendition of "Sukiyaki," a Japanese folk tune that became a surprise novelty hit for Kyu Sakamoto back in 1963. Erskine's version, featuring guest Judd Miller on electronic whistling, hints at the deeper meaning of the song, whose title—literally translated—means "I Look Up As I Walk." No mention of the yummy beef dish anywhere. The song was originally written as a protest to the continued presence of the US Army in Japan. Miller's EVI sound refers to the song's original lyrics, in which the protagonist is whistling a tune to keep from crying. And so it goes with the rest of In Praise of Shadows, an album replete with subtleties and multiple layers of meaning.

Interesting also is the album's simultaneous release alongside Erskine's latest effort with his co-operative jazz-funk fusion unit, the Dr. Um Band. In Praise of Shadows provides an interesting set of parallels and contrasts to its sister release. The music on both albums is a type of 21st Century jazz-everything fusion: tight but loose, replete with subtle "world-music" flavors, complex yet easy to grasp, executed at the virtuoso level, looking back fondly as often as it hints at the musical future, balancing moments of deadly seriousness with quirky wit.

Though most of the original material here was written by pianist Vardan Ovsepian, this is clearly Erskine's show. In this day and age of the "monster drummer" Erskine's approach to sound is refreshing and highly personal. It's not about the number of notes Erskine plays, or the craziness of his polyrhythms. Though he is the consummate "chops guy," Erskine's emphasis is clearly on Marianas Trench-deep groove and the potential for expression via multiple layers and subtleties in the music. The crazy-quilt construction of tunes such as "Labyrinth" and "What If" is tempered by the fruits of the percussionist's quest for new percussive sounds and interesting ways to incorporate them into music. Somehow, it all comes off as incredibly artistic and un-fussy.

On electric bass is the drummer's nephew, Damian Erskine. Like his Uncle Pete, Damian is a big-picture guy whose prodigious chops never overwhelm his desire to make the music sound great. Given the incredible support of the Erskine Family, Ovsepian really gets to wail throughout In Praise of Shadows. He's a nimble, quick-thinking European-style player (i.e., obviously classically-trained, rarely refers to Gospel sources though the latter do crop up in his solo on "Distant Blue") with a very precise touch that's apparent even when he turns to the electric keys. On the acoustic, he sounds a little like Myra Melford.

Ovsepian's writing is similarly active and resourceful. Though there's no evidence of song authorship anywhere on the album's packaging (and precious little on Erskine's website, for that matter), one may conclude that the pianist penned most of the pieces here. My personal favorites are "What If" and "Labyrinth," the album's two hyperactive, up-tempo pieces. Besides being super-fascinating, both serve an auxiliary purpose as percussion showcases. Brooding ECM-like moods carry the day on several tracks, particularly "All That Remains." However, Damian Erskine's supple electric bass imparts a particular sort of punch to the proceedings that keeps the music from getting too impressionistic. The music also gets an extra boost from Uncle Pete's habit of reinforcing the basic drum tracks with shakers, brushes and other subtle percussive maneuvers. Erskine's sole original, "Each Breath" is an earworm with a tropical feel that benefits from a guest shot by cellist Artyom Manukyan.

If there's anything Uncle Pete enjoys, it's an oddball cover tune, and I am guessing there are three of them on In Praise of Shadows. Besides the aforementioned "Sukiyaki," "Smile" gets and exceptionally odd treatment with tightrope-walking cello and plunky-sounding marimbas framing Varsepian's head-spinning, acrobatic solo. A sweet, somewhat resigned ballad with some truly dark harmonies moving around within, "Marcheta" sounds curiously non-Mexican. Uncle Pete's brief solo on brushes provides a perfect stinger as the tune closes.

This is one piano trio that effortlessly establishes a signature sound by virtue of the very strong musical personalities involved.

Sukiyaki; What If; Each Breath; Labryinth; Marcheta ('A Love Song of Old Mexico'); Silhouette Shadows; Begin Within; Distant Blue; Smile; All That Remains.