BY MATT MARSHALL
October 28, 2011
Sign in to view read count 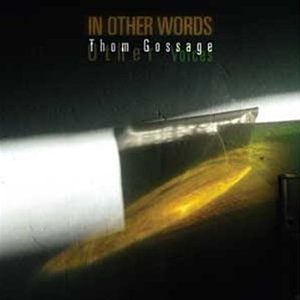 According to drummer Thom Gossage, the tracks on this, the fifth release by his Other Voices ensemble, are launched from a single figure—anything from a simple melodic line, to fully composed pieces of music, rhythm scores, electronic soundscapes, chants and poems—that are subsequently abstracted through an assemblage process. The idea came to him after viewing a painting by choreographer Isabelle Van Grimde, and seeing the process she followed to achieve abstraction of a visual figure.

The group has retained the same lineup since 2005, when guitarist Steve Raegele joined, and there is, indeed, a sonic chemistry in the pieces here—an essential ingredient for music that lacks a clearly charted course. That chemistry keeps the record well-hinged, even when its guiding wires are not readily discernable. Gossage allows for expansive fields to be filled by all players with results, conversely, of an insular quality—music both infinite and contained like the mind. The pieces might even be termed meditative, if meditation can rightly be said to harbor the intellectually aggressive explorations of a caffeine-fueled, stress-riddled brain.

Much of the music seems to stem from anxious, wired individuals, and is often out-and-out alarming, most notably on "Counter Counter Clockwise," which resounds with a repetitive group throbbing (a flashing red light, to think visually) that then dissects into individual yet simultaneous lines of warning. "Chemins II" is something of the album in microcosm, opening as it does with Raegele's magnetic, distorted shreddings that draw the others in kind, only to relax time and again for more considered, individual musings before the tension ratchets up once more.

The title track, which opens the record, begins on the lone twanging of a Jew's harp that Gossage soon layers with an electronic clanging to sound in echo. Later, after Raegele adds Bill Frisell-like high, lonesome tones and saxophonists Frank Lozano and Remi Bolduc twist energetic, contrapuntal lines, Gossage rumbles in on drums with bassist Miles Perkins in stride, the pair fraying the music and considerably cranking up the urgency and tension. That give-and-take, layering and twisting quality flows throughout the album, with each instrumentalist also equally concerned with exploring his individual palette.

There's much to be found in these intricate, improvisational ramblings, and repeated listenings allow for wide adventuring through the mental brush. At close to an hour in length, however, a start-to-finish trek can be draining. And the album could have done without its closer, "Tom Arthur's Dinner"—a Clockwork Orange-sounding recitation that sums the whole as a kind of musical smorgasbord. Still, the album is dense yet inventive; hypnotic but never sluggish. A rewarding sonic experience.