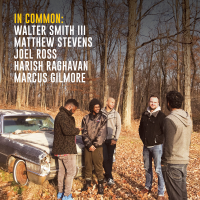 Eschewing the traditional desire for their compositions to be individually attributed, this group of five virtuosos has instead determined to retain a collective responsibility for their music. This is a brave philosophy but it works remarkably well. In this spirit, "freefive" is a tentative improvised duet between Walter Smith III on tenor saxophone and Matthew Stevens on guitar. Things take off on the swinging "Unsung," Stevens' crystalline guitar tone now channeling Bill Frisell.

"YINZ" is a more obvious collective improvisation, the melody instruments clambering over one another but still affording space to each musician. "ACE" opens with a fleeting and enchanting musical box effect, the tenor sax introducing a captivating melody which is soon rejoined by the ensemble but still retaining a mesmeric feel. This melody is also tantalizingly revived on the two-minute album-closer, "ACE (Reprise)," but here with just saxophone and guitar.

A satisfying head arrangement opens the short but swift "Baron" while, by way of contrast, guitar and bass lead off on the dreamy, crab-like "13th Floor," with tenor saxophone pursuing the melody, eventually joined by Joel Ross' scintillating vibes and Marcus Gilmore's snap-crackling drums. There's more of this electrifying drumming on the boppish "About 360," with foot-tapping support on bass from Harish Raghavan.

This democratically credited release proves an excellent debut for the quintet and a follow-up should be eagerly anticipated.