By Roger Farbey
February 12, 2017
Sign in to view read count 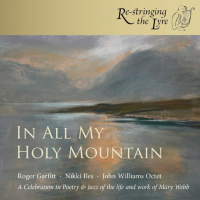 The amalgamation of poetry with jazz is not a new concept. Jack Kerouac was reading his words accompanied by Steve Allen on piano on the album Poetry For The Beat Generation way back in 1959 and over the water in 1963 The Michael Garrick Trio with Joe Harriott and Shake Keane released the EP Blues For The Lonely which featured Jeremy Robson reciting his poems over Garrick's music. There were even Poetry and Jazz concerts in the UK during the 1960s, organised by Garrick and Robson and at the same time Stan Tracey's group accompanied poet Michael Horowitz with his New Departures superjams. Tracey later performed Dylan Thomas's epic poem "Under Milk Wood" with Philip Madoc reciting the words on the album Jazz Suite—Under Milk Wood, which should be distinguished from Tracey's earlier instrumental masterpiece of the same name.

So all these years later, this poetry and jazz session comes as a welcome surprise. In 1999 John Williams commissioned Nikki Iles to write for an octet of players and this was duly performed the same year at the Soho Jazz Festival. In 2015, a recording was made of this music and is dedicated to the late British bass virtuoso Jeff Clyne for whom the bass part was written. As to the poetry, In All My Holy Mountain tells the story of romantic novelist Mary Webb whose stories, written early in the last century, were set primarily in the English Shropshire countryside. Poet Roger Garfitt's words reflect this aspect in his often bucolic imagery; check out "Listening For The Sedge Warbler" replete with recorder solo. Two tracks on the album have alternative versions elsewhere, "Westerly" was also used on Iles's album made with Norma Winstone and The Printmakers on their 2015 debut album, it also appeared on Iles's 2009 album (with saxophonist Martin Speake) Secret. "The Wedding Breakfast" also appeared on The Printmakers's album under the title of "High Lands."

Saxophonist John Williams, who leads an octet of fine musicians, and who shouldn't be confused with the American composer of the same name, has been a stalwart of the British jazz scene for many years. Williams has previous form pairing poetry and jazz, as witnessed by 1996's Spotlite album of especially commissioned jazz songs based on A. E. Housman's poetry, Five Housman Settings And Other Jazz Works. He also collaborated with Garfitt on an earlier project Presences of Jazzlaunched in 1999 and which was performed live with Williams's septet and Nikki Iles.

Tracks such as "The Haunting" are imbued with all the joie de vivre that is typical of Iles's compositions, and is centred on a breezy serpentine riff played by the ensemble. There's even a boisterous guitar solo from Dave Warren thrown in for good measure. The compositions throughout are characterised by warmth and vitality and are embellished by the piquancy of Garfitt's spoken words, adding a literary perspective rarely found in jazz these days.

Westerly; Listening For The Sedge Warbler; Fatherless; The Wedding Breakfast; The Haunting; The Part Song.

Title: In All My Holy Mountain | Year Released: 2017 | Record Label: Restringing The Lyre