Nicole Pasternak: In A Word

BY SUZANNE LORGE
January 11, 2006
Sign in to view read count 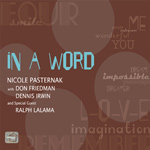 On her fifth album, In A Word, Nicole Pasternak explores the import of lyrics in vocal music. Curiously, what stand out most are Pasternak's confident, straightforward scat solos—especially on "Four, where the dialogue with her band of accomplished jazz instrumentalists is a purely musical one. But when it comes to words, Pasternak has chosen some of the best.

A veteran of the Great American Songbook, Pasternak draws on material from both inside and outside the traditional jazz repertoire to support the theme of the record. In one moment she moves playfully through Frank Loesser's "Inchworm (originally from the movie Hans Christian Andersen but immortalized by John Coltrane as an instrumental); later she delves sensitively into Bob Merrill/Jule Styne's "People, Barbra Streisand's pop hit from Funny Girl. And Pasternak's clever medley of Johnny Mercer's "Dream with Antonio Carlos Jobim's "Dreamer demonstrates how a single word can provide the impetus for a musical idea.

Behind the words is solid musicianship. On piano, Don Friedman solos or comps with equal dexterity, and bassist Dennis Irwin wastes not a note nor a groove. Vanguard Jazz Orchestra member Ralph Lalama appears as a special guest on the recording; his tenor sax solo composition "Me follows Pasternak's version of the Harold Adamson/Walter Donaldson tune "You, in keeping with the back-and-forth, conversational tone of the record.

In the liner notes Pasternak discusses her relationship with her partner, Ralph Lalama, who performs with saxophonist/composer Joe Lovano's Grammy-winning nonet. Pasternak and Lalama acknowledge the influence each has had on the other's musical development; in their innovative duet on "Inchworm, Pasternak's reedy voice and Lalama's clear horn evoke a comfortable familiarity.

The musical family represented on the disc extends to include Pasternak's brother, Vincent, whose gentle composition "Wonderful describes the joy of time shared with a loved one. After spending an hour listening to the group's musical exchanges on this disc, it's easy to imagine that Pasternak simply gathered her talented friends and family for some quality time in the studio, and the result was In A Word.