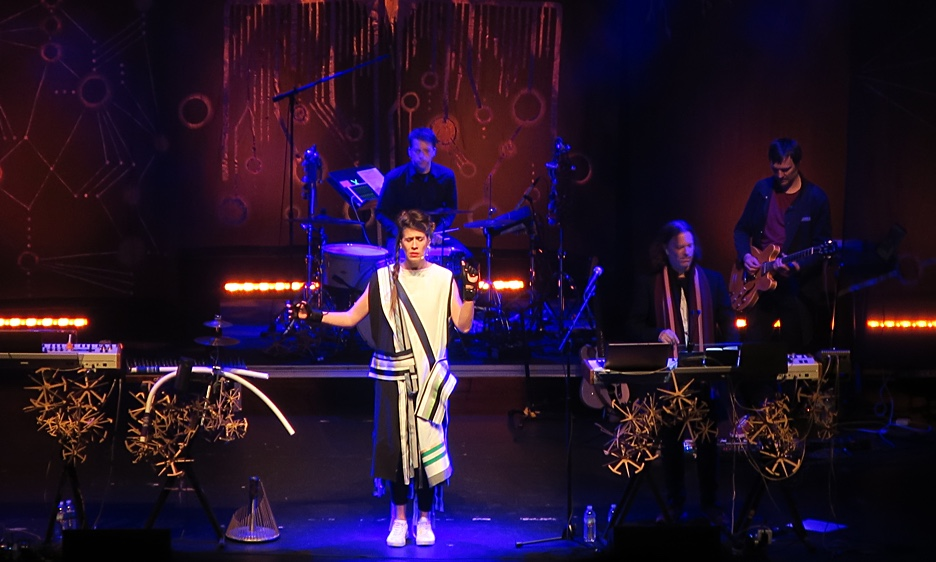 By Geno Thackara
May 10, 2019
Sign in to view read count
Imogen Heap with Guy Sigworth
Lincoln Theater
Washington, DC
May 4, 2019

You could say that Imogen Heap isn't exactly a musician, which is more of a compliment than it sounds. In the tradition of conceptual innovators like Brian Eno, she's more an artist who happens to use music as one part of a vast whole. The second night in Washington, DC on her Mycelia tour made an evening that was part concert, part dance party, part chatty hangout and part wickedly clever performance-art exhibit. For the Lincoln Theatre audience thrilled to catch her first USA visit in a good many years, it was a thrilling and dazzling experience nobody will soon forget.

Set against a beautiful painted backdrop of tree branches juxtaposed with circuit boards, the show likewise revolved around using fascinating technology to warm and organic results. The main setup in front consisted of two desks, each boasting some assortment of synth, laptops, consoles and odd devices with knobs to twiddle. The stage-left half belonged to her former Frou Frou partner and overall electronica renaissance-man Guy Sigsworth. From his swirling tones to resonant sounds from Zoë Keating's cello, backed up by drums, guitar and "sparkly keytar," it was a fascinating tapestry made of very slyly crafted pieces. Anything that can make sound, shape, process, warp or sculpt it is fair game in Heapworld.

For the songstress, though, the workstation was mainly a backup. She spent most of her time conducting the affair wirelessly from center stage with her trademark self-developed Mi.Mu gloves—an innovation that has "completely changed the way I think about music" itself, as she put it. Her own joy was infectious as she demonstrated how to trigger samples, loop, pan, reverse or manipulate sounds in any conceivable way with the deft flick of a wrist. Instruments often serve as a figurative extension of the player's own hands and mind, but in this case it's probably more true and literal than ever.

Heap's name had the top billing and most of the music came from her solo catalogue, but nonetheless it was hard to overstate how much Sigsworth contributed to the mix. Some material from their joint album Details (MCA, 2002) fit right in with the all-encompassing set—which is to say it all usually fit somewhere under the umbrella of genre-bending electronic songcraft, brainy, unclassifiable and still always approachable.

The pieces themselves could be catchy verse/chorus songs, spoken-word meanderings garnished with abstract improvisation, or anything in between. Richly lush singalongs ("Let Go" or "First Train Home") slotted alongside the rocking danceable likes of "Goodnight and Go," sprinkled with starkly personal ballads such as "Speeding Cars" and "You Know Where to Find Me." Heap's songwriting smarts stayed as distinct as her mellifluous singing voice through any mode or diversion that came up.

For music so heavily programmed, it was a remarkably spontaneous performance subject to the feel of the moment (not to mention the odd unavoidable technical snafu). Similarly, a string of between-song audience Q&As led to free-ranging rambles about the recording process, music-industry economics, motherhood and future plans. Nothing helps audience-performer connection quite like stories about insomnia and Harry Potter.

The affable vibe stayed through two dynamic sets, culminating with a straightforward adaptation of the iconic a capella "Hide and Seek"—replacing the vocal robo-harmonics with simple pretty atmospheres—that had the room spellbound. It couldn't have made a more fitting finale for such an electrifying evening: beautiful, evocative and always unlike anything else out there.