BY DAN MCCLENAGHAN
February 26, 2011
Sign in to view read count 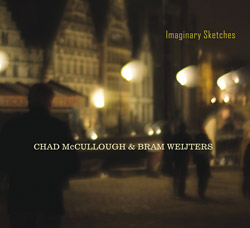 Seattle-based trumpeter Chad McCullough certainly isn't letting any dust settle on his horn, or on his equipment in the recording studio, following up his sophomore effort, The Sky Cries (Origin Records, 2010), with his third CD for Seattle's Origin Records, Imaginary Sketches.

McCullough's debut, Dark Wood, Dark Water (Origin Records, 2009), had a straight-ahead, joy of playing jazz atmosphere. His The Sky Cries (Origin Records, 2010) trimmed the sextet down to a quintet, teaming the trumpeter with Slovakian pianist Michel Vanoucek and mixing up American and European tints.

Going again with a European cohort, McCullough co-leads Imaginary Sketches with Antwerp-based pianist Bram Weijters, this time distilling the band down to a quartet.

Opening with a McCullough original, "Imaginary Folk Song," the stage is set for deliberation and majestic melancholy, with McCullough's pure tone and simplicity of melodic lines melding with Weijters' grace and drive, his nuanced and inexorable piano solo singing to the heavens.

Of the eight tunes offered here, five are from Weijter's pen. His "Burning Question" finds McCullough muted and pensive, in a Miles Davis way, as Chuck Deardorf's bass repeats two solemn notes, giving the sound a reverent hue. Another Weijters original turns up the bright lights and cooks, sounding like something would would fit in nicely on a straight-ahead Freddie Hubbard set, while his "Another Dark Ballad" sounds like a slow, wandering walk through a gloomy forest.

"Restless," another Weitjers tune, showcases co-leader McCullough's warm lyricism in front of the subtle interaction of drummer John Bishop and bassist Deardorf, along with yet another eloquent piano solo.

The set closes out with the McCullough-penned "Late Night, Long Drive," a moody, lonely, inward journey to wrap up a beautiful and very cohesive album from trumpeter Chad McCullough, a fresh and potentially (hopefully) prolific talent, and a dynamic but relative unknown pianist, Bram Weijters.