By Doug Collette
October 23, 2012
Sign in to view read count 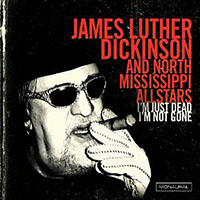 The music of I'm Just Dead, I'm Not Gone is as ghostly as the black and white cover photo of its principal. North Mississippi Allstars provides appropriately earthy accompaniment to a front man who commands the spotlight in larger-than-life fashion.

A little background helps enhance the focus on the portrait provided by this album, sufficiently vivid as it is. By the time of his death in 2009, James Luther Dickinson had become something of a griot of southern music and rock in general. Beginning his work at Sam Phillips' Sun Studios, Dickinson went on to become a fixture at Criteria Studios in Florida where, as a member of The Dixie Flyers, he backed singer Aretha Franklin, among other prestigious artists on Atlantic Records, prior to various solo projects.

Playing keyboards and singing, Dickinson eventually worked with The The Rolling Stones and guitarist Ry Cooder, and acted as producer for a wide array of acts including The Replacements, Big Star, and John Hiatt, all the while nurturing the musical talents of his two sons, Luther and Cody—who, after engaging in the punk band DDT, went on to form The North Mississippi Allstars, one of contemporary blues' proudest standard-bearers (which has also recorded and toured with Hiatt).

With that trio, also including bassist Chris Chew and here featuring guitarist/vocalist Jimmy Davis, Dickinson was recorded in monaural sound in 2006 on Beale Street in Memphis, playing music that packs a punch on a purely visceral level, simultaneously presenting a textbook of roots music and replicating the flashpoint where country music and blues became rock 'n' roll.

Yet, it's not just the sting of Luther Dickinson's guitar on "Kassie Jones," the mighty wallop of his brother Cody's drums throughout, or the pointed boom of kindred spirit Chew's bass that permeates this unpolished audio; the sounds of the instruments resound in the large shadow cast by the highly salty presence of the man who receives top billing here. The sardonic spoken word intro is, indeed, only the beginning.

James Luther Dickinson sounds like he's lived "Ax Sweet Mama" and "Codine" and, if he isn't exactly the better for the experience(s), his survival reaffirms a lust for life that, in more lighthearted moments such as "Red Neck Blue Collar," reveals a hard- won joy. "Money Talks" shows why Luther Dickinson has come to rival Derek Trucks in both ingenuity and intensity but, as is the case on that track and "Down in Mississippi," he generally defers to his the front man as any judicious sympathetic accompanying musician would do.

It is, however, not so difficult a challenge to sublimate himself, along with his comrades, to the role played to the hilt by as versatile and musicianly a figure as has inhabited contemporary music. Much of I'm Just Dead, I'm Not Gone may sound familiar in terms of lyrics and chord changes—most obviously in the form of "Truck Drivin' Man"—but definitely not so much in terms of raw authenticity.