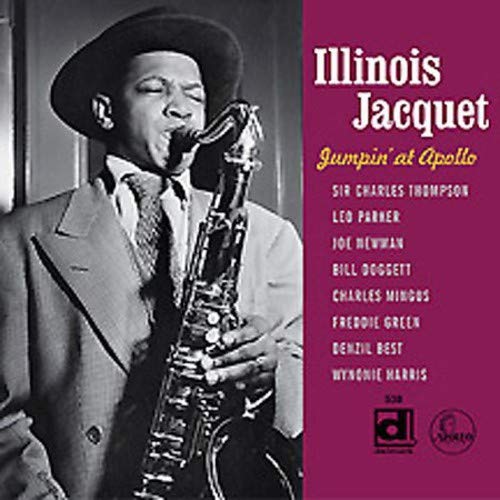 A top soloist and perhaps an undervalued ensemble player, Illinois Jacquet's crowded, busy style lends to a sort of jazz populism—the flashy horn man best known and celebrated for a few outstanding, transcendent performances wholly distinct from the typical quality of his work. In the realm of rock and roll, Jacquet might put one in mind of Alvin Lee and his Woodstock performance of "I'm Coming Home," or in jazz of Paul Gonsalves on "Diminuendo in Blue and Crescendo in Blue" at Newport in 1957; for Jacquet himself, his signature performance was, of course, Lionel Hampton's waxing of "Flying Home." Compellingly energetic, Jacquet's solo is a masterpiece of rhythm, of building excitement and tension and finally tension resolved. Released several years before these sides for Apollo, "Flying Home" represents Jacquet at his most extreme, though perhaps not as consistent, and appealing, as his style would eventually prove.

Recorded with a range of musicians between August of 1945 and May of 1947, these Apollo tracks are all punchy, bright, and revealing of Jacquet mastering his horn, developing in tact and execution what he was, evolvingly, dropping in histrionics. There is still plenty of the rapid fire, "look at me ma" soloing that would later prove Jacquet's undoing as he became a caricature of himself on Jazz at the Philharmonic dates, and these instances duly prove the album's gilded treasures, affecting at first, though not its true rewards. For those, one must look to the calmer, more discreetly paced and managed tunes, even to Jacquet the ballad player. Coolly mannered, Jacquet's playing on "Ghost of a Chance" is irresistible; he seems to virtually narrate the tune's minor key phrases with preternatural authority, a talent perhaps less fully realized but still in evidence on other tracks like "Memories of You" and "She's Funny That Way." One must also not miss the inspired teaming of Jacquet and vocalist Wynonie Harris on "Here Comes the Blues" and "Wynonie's Blues," two impressively commanding musical voices not vying, as one might expect, for first billing, but rather settling back and achieving yet another of jazz's peculiar symbiotic relationships. Or to go one step further, a relationship that quite nearly extends to rock and roll.

About Jumpin' at Apollo