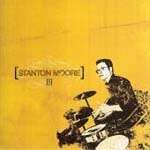 Sometimes it's fun to play "Six Degrees of Separation, though in the case of Stanton Moore's III, it's a simple game. The New Orleans drummer has worked with organist Robert Walter on numerous occasions, most recently on Walter's groove-centric Super Heavy Organ (Magnatude Records, 2005). Guitarist Will Bernard is no stranger to music with a visceral energy, as evident through his work with TJ Kirk, also featuring eight-string guitarist Charlie Hunter. Hunter has worked with Moore many times, notably with the ongoing Garage a Trois project, completing the connection.

Saxophonist Skerik is, of course, a charter member of Garage a Trois, and while trombonist Mark Mullins is best known for his work with singer/pianist Harry Connick, Jr., he's intersected with Moore on more than one occasion. That all these musicians can play is a given; but this collection of soulful and often downright greasy tunes by Walter, Bernard, Mullins and others sounds like the group has played together for years. While that's not actually true, the apparent chemistry between subsets creates a cumulative effect.

This music was recorded at New Orleans' hallowed Preservation Hall, and it's no surprise that it sounds live. Moore has always used a big kit—not as in a lot of drums, but big drums. Few drummers employ a 26 bass drum, but when Moore kicks it, you feel it. Add to that the live sound of recording in a good-sized room, and the only thing missing is the smoky haze and clink of glasses. Moore takes few solos, but when he does, it's clear that there's a lot more going on behind the loose, slap-happy playing that he uses to support Walter and Bernard.

Bernard's riff-based "Dunkin' in the Deep powers a gut-wrenching solo from Skerik. Abdullah Ibrahim's "Water from an Ancient Well, with Moore on mallets, is a gospel soul piece that, along with the Delta vibe of "When the Levee Breaks, spotlights Bernard's slinky slide work. Ending with the poignant traditional "I Shall Not Be Moved, the trio makes its statement about New Orleans in ways that words never could.

One useful reference point may be A Go Go (Verve, 1998)—guitarist John Scofield's fine collaboration with Medeski, Martin & Wood—but Moore trumps it with a greater sense of authenticity. Scofield and MMW clearly have an affinity for this music; but III is an album by artists who live it.

Poison Pushy; Licorice; Big 'Uns Get the Ball Rolling; Chilcock; (Don't Be Comin' With No) Weak Sauce; Dunkin' in the Deep; Maple Plank; Water from an Ancient Well; When the Levee Breaks; I Shall Not Be Moved.