Home » Jazz Articles » Jamile: If You Could See Me Now

By Martin McFie
December 11, 2019
Sign in to view read count 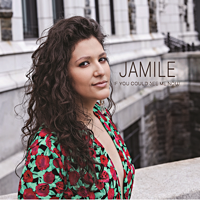 Jamile grew up in Cachoeira do Sul (South Falls), a small town in Brazil towards the border with Uruguay. Her supportive family had no particular interest in music. Imagine her surprise, then, at finding her twenty-something self launching this debut album at Gianni Valenti's Birdland Theater in New York City.

After completing her studies in Brazil, Jamile decided to do her masters in jazz in New York. "When I came to New York City in 2017," she says, "that was the first time I had traveled outside of Brazil. I found New York uncompromising and immeasurably tough. It was not a little scary for a young woman on her own. In the beginning, it was hard to get gigs, but after lots of self-promotion, once I started booking and performing, things began to flow.

"I had guidance from pianist Antonio Ciacca in production, though I found the overall process at times almost overwhelming, particularly in post-production. I prepared financially to pay musicians, studio, mixing, mastering, licensing, album design, printing, and promotion. It's a lot of work which takes a long time to do right, more than I thought. I hope to show where I am now in my music with this showcase album."

Jamile gathered around her Ray Gallon on piano, Steve Wilson on alto saxophone, Jay Leonhart on bass and Vito Lesczak on drums. The quality and precision of this group of musicians interacted crisply with Jamile's soft voice.

Jamile has a library of beautiful Brazilian music in her native language. She included two tracks on this album, "O Pato" (The Duck) filled with rapid and amusing onomatopoeia, and "Luiza," a fast and diction-demanding tune for the singer. She began swinging up-tempo with Dizzy Gillespie's "In the Land of Oo-bla-dee," a fairytale story of a beautiful princess switched for her ugly sister at the altar, and slowed into her after midnight presentation of "Ugly Beauty." "This Is New" showed both Jamile's vocal range and scat singing abilities against an excellent solo sax section from Wilson.

"Shiny Stockings" was a charming novelty track from Count Basie. "Jobim" was a reflective tribute to Antonio Carlos Jobim sung in English with a distinctly bossa nova rhythm. "Everything I Love" was played fast and acted as a vehicle for some rapid scat, and fast piano from Gallon with clean drums rattling along to a sharp finish by Lesczak. The title track to the album was delivered with a gentle lilt and a 1940s feel, a tribute to Sarah Vaughan both from the admiring Jamile and Tadd Dameron who wrote the music. The last track, "Nobody Else But Me," was a slow and relaxing number from the Broadway musical Showboat. The whole album sounds sharp, confident, and professional.

In the Land of Oo-Bla-Dee; Ugly Beauty; This is New; Shiny Stockings; Jobim; Luiza; Everything I Love; If you could see me Now; O Pato; Nobody Else but Me.

Title: If You Could See Me Now | Year Released: 2019 | Record Label: Self Produced