BY JOHN KELMAN
February 3, 2012
Sign in to view read count 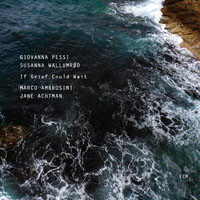 There was a time when hard lines existed between genres, but they seem long gone when tenor John Potter and electronic composer Ambrose Field can create a very 21st century take on 15th century musical frameworks with Being Dufay (2009), while Norwegian keyboardist Jon Balke conjoins baroque string ensemble and Fourth World progenitor, trumpeter Jon Hassell into a century and culture-spanning Siwan (2009). It's no coincidence that both recordings are on ECM; with If Grief Could Wait, the German label continues its defiance of categorization with a collection of spiritual and secular songs crossing 400 years.

Giovanna Pessi is no stranger to the gray areas between genres and the blurring boundary between form and freedom. Despite being the baroque harpist's first album as a leader/co-leader for ECM, work with guitarist/lutenist Rolf Lislevand on 2008's Diminuito and, more importantly, on Christian Wallumrod's rigorously constructed yet interpretively open Fabula Suite Lugano (2010) have clearly expanded her purview. It was while working with the Norwegian pianist that the classically trained Swiss first met Wallumrød's sister Susanna and her string of Rune Grammofon recordings, both solo and as one-half of Susanna and The Magical Orchestra. With her pure and unadorned voice, Wallumrød refreshingly demonstrates that you don't need melismatic melodrama to bring a plaintive perspective to original material and music from singer/songwriters such as Leonard Cohen, Bob Dylan and Sandy Denny; you need to get inside the song, understand the song, and deliver the song.

In a program dominated by 17th century English composer Henry Purcell and performed on instruments largely considered antiquated, rather than creating temporal paradoxes with the inclusion of contemporary material from Cohen, Nick Drake and Wallumrød, If Grief Could Wait feels strangely distanced from any particular timeframe—instead, unequivocally timeless. The combination of Pessi's baroque harp with Jane Achtman's viola da gamba (from the 15th century) and Marco Ambrosini's Swedish nyckelharpa (a 14th century traditional keyed fiddle) creates a warm, evocative cushion over which Wallumrød's voice floats and occasionally soars, with the kind of effortless control that renders significant each note and every nuance. And it's not just Wallumrød whose contributions resonate because of their very nature; economy defines the entire ensemble—with Achtman and Ambrosini astutely recruited by the harpist and producer Manfred Eicher respectively, a year after the two women began rehearsing, searching for commonality to bridge two very different musical backgrounds.

As different as their backgrounds appear on the surface, there were common frames of reference from the outset. Both Pessi and Wallumrød are Cohen fans, bringing one song each to the repertoire; and if Wallumrød's recordings suggest a predilection for pop and singer/songwriters, neither is she a stranger to Purcell. But it's the apparent antithesis of their backgrounds—and the combination of archaic instruments with Wallumrød's more modernist vocal approach—that renders If Grief Could Wait somber without gravitas; delicate yet substantial; and evocative and powerful, all while retaining a timeless quietude of contrast and relief from the sometimes relentless noise and stress of the time in which it exists.

The Plaint; Who By Fire; If Grief Has Any Pow'r to Kill; The Forester; A New Ground; You Know Who I Am; Hangout; O Solitude; Which WIll; A New Scotch Tune; Music for a While; A New Scotch Tune, Var.; An Evening Hymn.