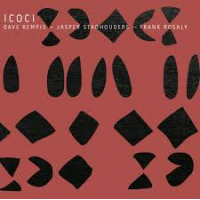 In avant jazz, as in other artistic endeavors, talent alone isn't enough. Success requires a large slice of luck too. Chicago-based reedman Dave Rempis knows that as well as anyone. As a consequence he works hard at making his own luck: he concentrates on running a string of regular outfits; assembles a network of supportive venues; makes connections between players across the States and abroad; and documents the resulting outcomes.

Icoci represents the scorching debut of a new trio which reunites him with drummer Frank Rosaly (a fixture in his Percussion Quartet) alongside Dutch electric bassist/ guitarist Jasper Stadhouders, who partners with Ken Vandermark in Made To Break and Shelter, and spars with another fiery saxophonist, John Dikeman, in Cactus Truck.

The location for the live recording, Amsterdam's Occi club, inspires the name of the album and the two expansive improvs it contains. While there are sufficient episodes of raw, ferocious free jazz to grab the aficionados' attention, they come leavened by controlled timbral exploration which will have listeners leaning in close.

Much of the time it's a three way enterprise, illuminated by inventive passages like the knotty interplay between circular-breathed alto, clanking percussion and scuttling guitar on "IIOII." But on occasion Rempis' freewheeling virtuosity demands the spotlight. His repeated alto phrases build to a tirade later on the same cut. Then when lyrical flourishes pepper the invective, they evoke barbed wire dipped in honey in their thorny sweetness.

Stadhouders' electricity gives the band a distinctive character and exudes a shark-in-the-water threat of imminent attack, even in the quieter moments. On guitar he suggests a bracing mix of Derek Bailey and Joe Morris, emphasizing the percussive aspects of the instrument. He excels in a fractious but spacey exchange of staccato shards and saxophone explosives at the outset of "OIIO," before Rosaly's propulsive tattoo kick starts a jostling twin-pronged assault. Here as elsewhere, the drummer's spiky clatter keeps all options open, facilitating the sudden switchbacks in dynamics which make this disc an endless source of fascination.