BY EYAL HAREUVENI
September 30, 2012
Sign in to view read count 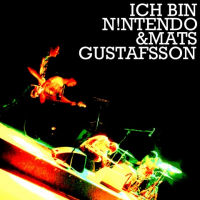 Young Norwegian power trio Ich bin N!ntendo is a sonic heir to European power outfits such as the Swedish-Norwegian trio The Thing, Italian punk-jazz trio Zu, and Dutch quartet The Ex. Its affinity with Swedish sax titan Mats Gustafsson of The Thing, who guests on this live recording, is obvious. Both enjoy exploring and pushing the physical aspects of their instruments into utter intensity.

This debut album was recorded live in Oslo, later "mixed, mastered and destroyed" by noise artist Lasse Marhaug. More accurately, Marhaug managed to inject some sonic coherence into the dirty, reckless noisy soundscapes of these four musicians, enveloping them in a crisp, vibrating sound.

From the first second, the approach on the first two brief tracks is clear and simple: fast and muscular, with total surrender to the highest volume possible to bear. There is not a second of rest, no attempt to form a linear structure or to show off with virtuosic or technical playing; just a complete release of raw energy, with no inhibitions.

The third track, "Second," is longer, at about 17 minutes, in an album that clocks at a mere 28 minutes. On the this track, Gustafsson's powerful playing can be appreciated. His baritone sax soars over the noisy and distorted chaos and supports the trio's violent sonic outbursts. The trio is willing to take more risks and, on this longer soundscape, references earlier high-octane sound explorers such as the late American guitarist Sonny Sharrock and the Finnish guitarist Raoul Björkenheim.

Not for the faint of heart.