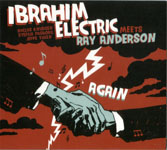 Ray Anderson can make a trombone sound like a hive of bees or just about anything else. That means he's a good match for Ibrahim Electric's Ibrahim Electric Meets Ray Anderson Again, recorded live at Copenhagen's JazzHouse and Pakhuset in ?rhus in February 2007, the second meeting between these two forces of nature.

This group is all about fun, funk and a few other things: a popular 1960s party groove meets jazz improv, blues and rocking riffs with a jam band feel. They've done this before and perhaps the idea is if it ain't broke don't fix it. These guys don't take themselves too seriously and that's a good thing.

Song titles give a clue to what this is all about. Among the eight tracks, there's "Funkorific," "Splash," "Skip It," "Blue Balls" and "Absinthe"; in Danish maybe all that spells p-a-r-t-y?

Who are these guys (if you don't know already)? They're all Danes: Niclas Knudsen on guitar, Stefan Pasborg on drums and Jeppe Tuxen on Hammond B3 organ. And, oh yeah, that American trombone... "Vocals" are supplied by the screaming audience members at the show in Copenhagen. They sound like they didn't spend much time in their seats.

Throughout Anderson provides tireless, inventive solos, amiably supported by the large talents of these great Danes. While somewhat derivative in mood and inspiration—originals, but incorporating many reworked riffs and beats of the psychedelic era— all eight pieces sound vibrant and energetic and just the thing for your next rent party. This is the kind of record where you don't have to think too much. Think of it as a Copenhagen vacation, circa 1968.

Visit Ibrahim Electric and Ray Anderson on the web.