Donna Courtell: I Want a Doll

By C. Michael Bailey
December 10, 2021
Sign in to view read count
Track review of "I Want A Doll" 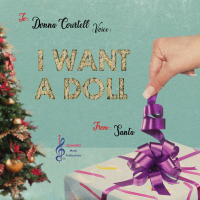 Some music is self-evident and some needs unpacking. Donna Courtell's holiday single "I Want A Doll" is music of this latter category. Courtell splits her professional time between singing and running her Courtell Talent Agency. Her creative arc recently intersected with that of bassist Greg Nathan and by extension, Nathan's father, Charles. There is a bit of history here. Nathan released a duet recording with guitarist Mike Denny in 2014, I'll Think Of Something (Self Produced), featuring some tried-and-true and some road-less-traveled standards performed and sung by Nathan. The charm of this release was the honesty and intention in the Broadway lyricist voice of the bassist. At about the same time, Nathan founded Soaring Music Publications, acting as their CEO in charge of Production and Marketing, Since then, he has divided his time between teaching and his music company..

The late Charles Nathan, a noted songwriter known for writing Perry Como's 1953 hit, "Say Your Mine Again," wrote the secular holiday tune "I Want A Doll." This song was in search of a performer until Courtell's and Nathan's said creative arcs intersected, resulting in the single considered here. It is a classic peri- World War II vintage modern seasonal song in perfect keeping with the Sammy Cahn -Jules Styne}} composition "Let It Snow, Let It Snow, Let It Snow" (1945) and Irving Berlin's "I've Got My Love To Keep Me Warm" (from the 1937 film On the Avenue). Greg Nathan arranged the piece for jazz septet (piano guitar, bass (Nathan playing), drums, saxophone, clarinet, percussion)) giving it an upbeat, urban personality with a light and swinging pacing. Courtrell digs deep, providing a 1950s hip vibe with a crisp, clever spoken coda, all properly accented with Paul Biondi's tenor saxophone. "I Want A Doll" is a trip down memory lane in real time and a holiday canon contender.

I Want a Doll