Delvon Lamarr Organ Trio: I Told You So

By Mark Corroto
February 2, 2021
Sign in to view read count 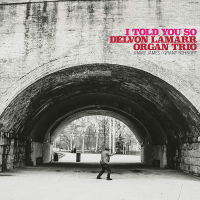 This Seattle outfit born in the tradition of soul jazz or if you prefer the parlance of our times, jazz funk, previously released Close But No Cigar (2016) and Live at KEXP! (2018), both available on Colemine Records. This studio release pulls together organ trio threads from Medeski, Martin and Wood, Reuben Wilson, Booker T. & the MGs, and Jimmy Smith. We're talking booty shaking party music. The opening track "Hole In One" and "Call Your Mom" features Jimmy James' jang-jang guitar riffs, ones that would fit nicely in James Brown's stage show.

Add to that the sample-ready and funky drum breaks Grant Schroff lends and we have something as old as the 1960/70s, yet as fresh as DJ sampled swag. Lamarr's organ can groove and flash funky, but he also lubricates an effortless melody "Girly Face" and "Careless Whisper." The latter composition written for George Michael and the pop group Wham!. In Lamarr's hands, the banal is transformed into a refreshing ballad. Elsewhere the organ trio oozes danceable funk in "I Don't Know" and "Aces." The addition of guest Ben Bloom on "Right Place, Right Time" creates a tight two—guitar weave around Lamarr's organ and the funky groove is elevated even higher. Everything old is new again, and funkier.