Home » Jazz Articles » Diane Hubka: I Like It Here/Live in Tokyo

By Ken Dryden
September 2, 2009
Sign in to view read count 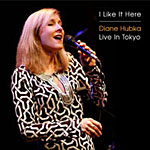 Cool-toned vocalist Diane Hubka first caught the attention of jazz journalists with her 1999 debut CD Haven't We Met?(Challenge-A) and she has continued to prove herself as an inventive, gifted interpreter of a wide range of material on her subsequent releases. Since leaving New York City for Southern California in 2004, she has played and recorded with a variety of top West Coast musicians.

Hubka faced two challenges for I Like It Here/Live in Tokyo. After being invited to tour Japan by the Sinatra Society of Japan, which asked her to perform songs associated with the legendary singer (which make up most, though not all, of this set), it was arranged to record her in concert, with Japanese musicians (pianist Kiyoshi Morita, bassist Masahiko Taniguchi and drummer Nobuhiko Yamashita) who were new to her and spoke very little English. But the language of jazz is universal and everything fell into place during this concert at JZ Brat in Shibuya.

Hubka handles the standards associated with Sinatra very well, as she has likely had most of them in her repertoire for some time. Her subtle take on the bittersweet "Angel Eyes" and slowly savored rendition of "You Go to My Head" (with a beautifully understated solo by Morita) are among the highlights of that portion of the set. Hubka adds her guitar on several sections, including a breezy "Agua de Beber" and the easygoing "Dindi" (both masterpieces by Antonio Carlos Jobim), while scatting up a storm in Ron Anthony's joyful "Faces" and excusing the rhythm section to accompany herself in Anthony's melancholy "It's Always 4 AM."

Title: I Like It Here/Live in Tokyo | Year Released: 2009 | Record Label: SSJ Records