Peter Yellin: How Long Has This Been Going On?

BY JAY DESHPANDE
February 10, 2009
Sign in to view read count 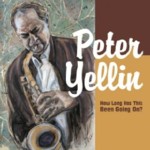 How Long Has This Been Going On?, Pete Yellin's first album of the new millennium, is a strong sampling of his abilities as an altoist and as a songwriter. It also showcases his connections across the jazz spectrum, built up over a five-decade career. Bob Mintzer, Billy Hart, and Sheila Jordan all make appearances here. And Yellin's regular personnel are excellent, too: pianist Renee Rosnes plays a lovely solo on a mid-tempo original, "Air for Aaron," and Peter Leitch brings in strong guitar work on "Another Hairdo."

On standards, Yellin gives tasteful nods to the tradition while still adding his own subtle filigree. He sets the melody of "How Long Has This Been Going On?" in the framework of a repeated figure from the rhythm section, personalizing it to just the right degree. His "Lover Man" bends the form just slightly and allows for an open-ended introduction on the bridge section before playing the head as an up-tempo salsa beat. The only exception to this artistic taste and restraint is on "Everything Happens to Me," where the normally exceptional Sheila Jordan presents a spoken-word vocal that has little to do with the song and sullies what would otherwise be a compelling rubato version of the tune.

It means something very particular to have Charlie Parker as your role model. Every saxophonist who knows anything about jazz will of course claim him as an influence, because so much of modern jazz derives from Bird's innovations. But to truly look to Parker as a musical guide—not just as a sacrosanct hero, but as a personal model—is a true rarity. Perhaps Yellin's greatest strength as an improviser is that his love of Bird is always evident, but never blots out his own voice. On the great take of Monk's "Four in One," Yellin uses authentic Charlie Parker wails, but never sounds like a rip-off of the original. And "CP," his homage to the earlier alto player, is written in the harmonic language of post-bop, rather than a purely Birdlike idiom. Altogether, How Long Has This Been Going On? is a pleasant outing, and a reminder of a stalwart player.

Four in One; C.C.U; How Long Has This Been Going On?; Air for Aaron; Dearly Beloved; Another Hairdo; CP; Everything Happens to Me; Lover Man.

Title: How Long Has This Been Going On? | Year Released: 2009 | Record Label: Jazzed Media