How High the Moon

With Moon in place...the Who now had possibly one of the most revolutionary rhythm sections in history (with the exception of George Washington's band, Delaware Surprise Party, which featured Thomas Jefferson on bass and Patrick Henry on drums) 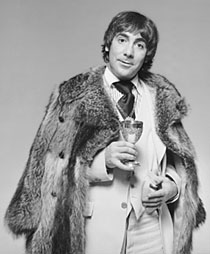 "The man is a drummer. Everything he plays, he contains it." —Elvin Jones on Keith Moon

As the Dean of American Jazz Humorists®, I am often called upon to offer my opinions in a wide variety of jazz-related matters. Recently, the directors of the Jazz at Lincoln Center program called me in to settle an ongoing dispute that had been brewing between Vice Chair Shahara Ahmad-Llewellyn and Wynton Marsalis as to who would win a fight against a 30-foot tall, firebreathing Duke Ellington and a 2,000-pound Louis Armstrong who has chainsaws for hands.

I assured them that Duke and Pops would not fight each other, but would team up to defeat a hideous, gigantic Boney James and Eric Marienthal who have been fused together by a nuclear accident.

Another intriguing query recently found its way to the Provisional Geniusdome. "Who, in your opinion, are some non-jazz musicians who deserve respect from jazz circles?" wrote little Nat, age 82, from New York.

The obvious answers, such as Willie Nelson (whose love of the herb rivals that of some of the greatest names in jazz history) and Rilo Kiley frontwoman Jenny Lewis (who is hotter than Bix Beiderbecke's solo on "Singin' the Blues"), should be immediately apparent to even the most casual student of Our Music. But one answer might come as a surprise to all but the most astute jazz aficionados, if they can be distracted from debating whether or not Miles Davis could shoot laser beams from his eyes long enough to consider the issue.

Keith John Moon (which is a lot of fun to sing to the tune of "Sloop John B." Try it. Now.) was born on August 23, 1946, in London, a tiny hamlet somewhere in England. Growing up an imaginative, hyperactive child, Keith frequently found himself at odds with the British public education system. Though it was these personality traits that would later contribute to his innovative drumming style and his hallowed place among rock legends, his teacher regarded him as "Retarded artistically. Idiotic in other respects." It is fortunate that Moon was born when he was or he would have been loaded up on Ritalin, subjected to endless self-esteem programs and this article would be about legendary country guitarist Roy Clark.

Moon began his musical career at age 12, playing the bugle. He abandoned it for the drums at age 14, when he realized that the ladies weren't exactly lining up for bugle players. Joining several local bands, including The Escorts (for which Ford would later name a small car that also tended to make a cacophonous racket) and The Beachcombers, Moon began building his reputation as one of the loudest drummers in the entire British Isles including that creepy little island where they filmed The Wicker Man.

At 17, Moon joined the Who which had already begun to establish a reputation as one of the loudest bands in all of the parts of Europe where they had electricity and running water. The story goes that Moon showed up at a Who gig and announced that he was better than the Who's (Whose?) current drummer, a wind-up clown. Who guitarist Pete Townshend tells the story of Moon, with hair dyed ginger* and wearing a ginger suit while drinking a ginger beer, approaching the bandstand with his cheeky boast and earning the job on the spot. In honor of that moment, I'm going to have a ginger ale and stare at pictures of ginger-maned Jenny Lewis until Mrs. Genius hits me in the cheeks with a pair of sticks.

Early on, Moon played a traditional five-piece kit (snare, bass, hi-hat, floor tom, and beer tap). He made the move to a double-bass kit in 1965, which was coincidentally the Chinese Year of the Double-Bass, before finally settling on a kit that was essentially two regular drum sets combined with a well-stocked wet bar and then-fashionable fondue set. This was to be Moon's signature set throughout his career, except for a brief period during which his excessive drug use caused him to believe he was Tito Puente.

In an era when most rock drummers were little more than human metronomes with good hair, Moon immediately stood out for his approach to the drums as instruments unto themselves. Not content with the standard boom-chick-boom-chick background drumming that permeated early-sixties rock, Moon drew on inspirations from the American surf music and R&B scenes to create a style that has been described as both "busy" and "orchestral." While no one will ever accuse him of being one of the greatest technicians of the instrument, Moon understood both his strengths and limitations and rightly proclaimed himself "The greatest Keith Moon-style drummer in the world."

With Moon in place, along with John Entwhistle's kinetic bass, the Who now had possibly one of the most revolutionary rhythm sections in history (with the exception of George Washington's band, Delaware Surprise Party, which featured Thomas Jefferson on bass and Patrick Henry on drums). This, as much as Pete Townshend's inventive songwriting, set the Who apart from the myriad of ridiculously-dressed British Invasion bands of the mid-sixties.

From the beginning, Moon's contribution to the Who was as much in his personality as in his drumming. "Moon the Loon," as he was known to those who weren't clever enough to come up with anything else that rhymed with Moon, single-handedly embodied the frenetic excesses that would later set the standard for outrageous rock star behavior. Moon pioneered the Hotel Room Hurricane (though, some rock historians credit Bill Haley, who once knocked over a lamp in a Howard Johnson's and refused to apologize), as well as the classic Car in the Swimming Pool.

Moon also gleefully joined in Townshend's famed "auto destruction," demolishing his drum set at the end of a concert as the guitarist smashed his guitar to pieces. While The Who did it first as an accident, when Townshend accidentally broke the head off of his guitar playing in a club with a rather low ceiling (The Crawlspace), it later grew into a quasi-nihilistic act of rebellion. It was during this act on The Smothers Brothers Comedy Hour that Moon would, unbeknownst to the rest of the band, load his set with explosives for a finale. The resultant blast permanently damaged Townshend's hearing and set a high water mark for showmanship that would stand until Lawrence Welk's Myron Floren unleashed his spectacular napalm-filled accordion during a performance of "Cherry Pink and Apple Blossom White."

Stage antics aside, the Who was quickly moving to the forefront of the burgeoning progressive rock movement. While the Beatles were making arty concept albums, the Who were creating the rock opera. With the nine-minute "A Quick One While He's Away," Townshend's songwriting transcended the boundaries of the three-chord, three-minute rock song and would lay the foundations for his later epic masterpieces Tommy and Quadrophenia. None of these would have been possible without Moon's contributions.

Roger Daltry would say, "Entwhistle and Townshend were the wool, but Moon was the needle," referring to the old "the Who as a jumper**" metaphor. He went on to add that, if they were a jumper, they'd be one of those really nice cable-knits that you'd actually buy for yourself and not one of those horrid things you get for Christmas with reindeers on them and such.

The Seventies began with the Who at the peak of their creative power, and Moon at the height of his ability. Who's Next and Quadrophenia, along with 1969's Tommy, offer perhaps the most complete record of Moon's inimitable style. As the decade wore on, though, Moon was worn down by his erratic lifestyle and prodigious substance abuse. Eventually, he was more famous for being Keith Moon than for his abilities as a musician.

Sadly, the decade ended with Moon, on the verge of turning his life around, being finally undone by his own penchant for excess. An accidental overdose (for a man accustomed to taking fistfuls of random pills routinely) of a medication intended to help him overcome his alcoholism ended Moon's life in 1979, shortly after the release of Who Are You, arguably the Who's best non-concept album since Who's Next.

Perhaps the most lasting compliment to Moon is that he has never been imitated. Any guitarist can ape Townshend's windmill power chords, but even the heartiest professional drummers rarely dare to venture into Moon territory. Listen to any Who cover, from Pearl Jam's version of "Reign O'er Me" to Matthew Sweet and Susanna Hoff's rendition of "The Kids Are Alright," and Moon's absence is conspicuous. Even the Who themselves, carrying on with a competent professional drummer like Kenney Jones after Moon's death, sound like an above-average Who tribute band. The difference is not just in the notes played, but the entire thought process behind them and the effect they have on everything going on around them. Like Thelonious Monk from the jazz world, it is Moon's mind that made his work completely unique.

* British people call redheads "gingers." This is just one reason why they no longer rule the world.

** They also call sweaters "jumpers," which is another reason. They also wear paper crowns from packages of Christmas crackers. No wonder they lost the Revolutionary War and the War of 1812; and those are just the ones I know about.