BY CLIFFORD ALLEN
September 3, 2009
Sign in to view read count 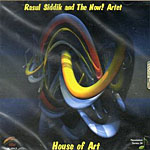 The idea of playing free within a set of modes or changes is certainly nothing new in the world of creative music, but it can still be striking when a musician talks about following in the footsteps of Charlie Parker or Max Roach as such. To hear music like that of Paris-based trumpeter Rasul Siddik and his Now! Artet is an instant reminder of how truly vanguard playing can exist in timeworn formats.

For House of Art's seven original pieces, the Artet consists of drummer John Betsch, saxophonist Ghasem Batamuntu, bassist James Lewis and either Bobby Few or Katy Roberts on piano. "Impulse" begins with a taut and condensed Betsch solo, a thematic improvisation presaging the theme. Siddik's head arrangement, lilting but reared back, is reminiscent of the Sonny Simmons-Barbara Donald juggernaut, his terse, throaty and fragmented cry skittering across Roberts' chordal outlines and rhythmic rejoinders. Where Siddik is thin and loose, Batamuntu's soprano empties with arpeggiated flurries and concentrated flame. An insistent vamp and churchy head is placed alongside airy rhythms on the title track, which quickly morphs into dissonant blats, Siddik and Batamuntu trading crunched and sputtering volleys.

The addition on two tracks of volcanic and encyclopedic pianist Bobby Few is of particular note. His ominous poise and deep gospel-Romantic superimpositions turn ears on the ballad "Shirley's Delight." In fact, the inclusion of a chordal instrument tempers what might otherwise move headlong into free-for-all territory. Closing with "Traveling East," percussionist Rai Bonini augments the group, a simple processional theme fleshed out with little instruments, pinched brass and soprano snaking through a meaty walk. It's taken three decades for Siddik to release a leader date and the wait has been well worth it.