BY JAKOB BAEKGAARD
October 4, 2013
Sign in to view read count 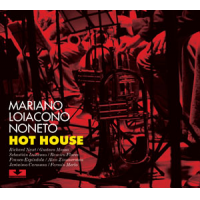 Bigger isn't necessarily better, but there's no denying that the expanded line-up of the nonet is a format that adds new nuances to the Argentinian trumpeter Mariano Loiacono.

Loiacono is one of the mainstays on Justo Lo Prete's Rivorecords and has previously released the excellent What's New? (Rivorecords, 2011) and Warm Valley (Rivorecords, 2011). Hot House is a radical departure from the chamber-like setting and warm flugelhorn-sound of the latter and instead elaborates on the brassy bop-punch of What's New?

The title is taken from Tadd Dameron's hard bop classic, which also opens the album. It is a fine vehicle for displaying the instrumental skills of the players, including the dry swinging sound of baritone saxophonist Ramiro Flores.

The program consists of time-tested classics like Benny Golson's "Remember Clifford" and Billy Strayhorn's "Chelsea Bridge" played in fresh arrangements. There's also room for an original composition from Loiacono, whose "Friday Blues" is a vibrant blowing tune that isn't as sad as the title might suggest.

Hot House is basically about the joy of playing, which is underlined by the bubbling playfulness in the reading of Thelonious Monk's "I Mean You." The dominant mood isn't the late hour ambiance of jazz-noir, but rather the hard swinging sounds of a ball-room dance. The kind of hot bop that could lift the roof of a house.