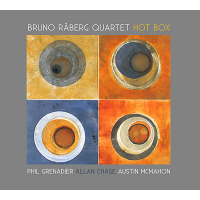 Bassist-composer Bruno Raberg leads an adventurous, empathetic pianoless quartet on Hot Box, his seventh recording as a leader. Born in Sweden, he has been living in the U.S. since 1981, and is a professor at the Berklee College of Music in Boston. His collaborations with trumpeter Phil Grenadier and saxophonist Allan Chase go back over 10 years, so they have a seasoned rapport. Drummer Austin McMahon is new to the party, but he blends right in.

The tone is set by the opening "Autumn Cycle," a sprightly start-and-stop theme reminiscent of Ornette Coleman. Both the writing and the lack of a chording instrument in the rhythm section contribute to a sense of openness, but the music is never "difficult," just a bit freer harmonically. The title tune follows, a marked contrast with a slow, dirge-like character. At nine minutes it's also the longest track in the program, but it does not overstay its welcome.

Two selections are credited as collective improvisations edited by the leader. There's no way to tell how much editing was involved—they could have been excerpted from a much longer performance, or just trimmed a bit for length—but Råberg took the opportunity to apply some electronic processing as well. The first one, "Atmos," has a striking electronic soundscape at the end that is an interesting change from the acoustic sound of the rest of the date.