By Mike Jurkovic
November 8, 2017
Sign in to view read count 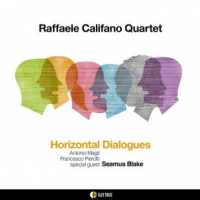 There is much to gush about on Horizontal Dialogues, Rome-based drummer /composer Raffaele Califano's second disc as a leader. From the playfully earthy and resonant 7/4 opener "A Beetle Romantic" through to the looping fusion of "Onin" and "Out of the Loop" Califano's sense of conversation, between instruments, between players, between players and listeners, holds forth.

Ably abetted by pianist Antonio Magli, who moves from piano to keyboards without a hitch and double bassist Francesco Pierotti, who one moment is joined at hip and deep in the pocket with his drummer and the next laying down his own path within the musical framework, provide Califano's layered compositions to cross the line from formal jazz to an almost rock n roll feel.

Extending the dialogues across the ocean, NY tenor saxophonist Seamus Blake of the Mingus Big Band, holds the feature chair throughout. And Blake does not disappoint, whether he's laying low on the opener waiting for his moment to soar, or ranging free through the legato melody of "Baron and Pres" or flying over and around the harmony re- arrangement of Mile's "Tune Up." With all that said, it's the lengthy "Damiani Tres Duo" that intrigues me most, with its warm elegant textures.

A Beetle Romantic, Baron and Pres, Damiani Tres Duo, Yune Up, New Life, Work Week, Out of the Loop, Onin