By Troy Collins
November 7, 2008
Sign in to view read count 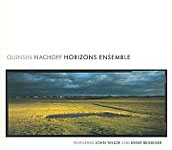 Horizons Ensemble is the sublime follow-up to Quinsin Nachoff's stellar Songlines debut Magic Numbers (2006). The Canadian-born, New York-based saxophonist continues to explore neo-classical territory initiated by the Third Stream Movement with a series of extended compositions that skirt a tenuous line between the written and the composed.

Widely considered a national treasure in his homeland, John Taylor's sophisticated harmonic palette enriches Nachoff's elegant compositions with an enticing combination of plangent romanticism and dark percussive drama. Ernst Reijseger is one of the Dutch jazz scene's most visible artists whose expansive technique spans a multitude of genres and styles, from blues to free. Nathalie Bonin reprises her earlier role as first violin on Magic Numbers, revealing a soaring lyrical tone and agile phrasing as she and Parmela Attariala ply sinuous cadences that resound with luminous euphony.

A subtly expressive and inventive soloist, Nachoff's introspective leanings are bolstered by an undercurrent of fulminating intensity. As ensemble leader he is incisive, yet occasionally offers extroverted fragments, such as at the outset of "Cartoon-scape." Inspired in part by the zany cartoon music of Raymond Scott and Carl Stalling, he unleashes an array of coiled shards as the mercurial tune careens through a multi-sectional narrative that sidesteps into swinging territory, indebted to Thelonious Monk and Lennie Tristano.

Nachoff's effervescent writing and clever arrangements are emphasized on "Bogardus Place," a lyrical rumination in 5/4 for the leader's honeyed soprano and dulcet strings, while "A River Remembers Rain" contains a series of regal refrains punctuated by spectral collective improvisations that peak with recoiling fervency. Conversely, "Glacial Lake" is the set's most reserved piece, an austere, ethereal meditation with a minimalist aesthetic.

Delving into more dramatic territory, Bonin ushers in "Desert Landscape" with a stark Bartokian cadenza before the tune segues into a wrenching meditation bolstered by Eastern European tonalities. "African Skies" concludes the session with an expressionistic tour-de-force of soaring strings and ebullient tenor that blends West African, Balkan, and Latin American folk traditions into a driving paean to global rhythm.

A multi-hued effort from one of today's most promising young composers, Horizons Ensemble advances Nachoff's Third Stream concepts down avenues ripe for exploration.