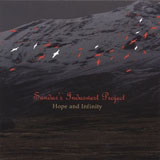 The fusion of Indian music and jazz is not new. It has been done before and will be attempted in the future. Enter Sundar Viswanathan. He lives in Canada, but was born of South Indian parents. As a musician Viswanathan plays the saxophone and sings. As a composer he brings in various thematic concepts. He gives them voice through different groups and collaborations. Sundar's Induswest Project is the herald for his work that intertwines ragas with jazz harmonies. The band is made up of some of the best Canadian musicians who capture the depth and magic of Viswanathan's compositions.

The first three tunes on this CD, "Samsara, "Moksha, and "Ahimsa form "The Kanishka Suite." Andrew Downing (bass) sets up the jazz pulse on "Samsara. Viswanathan, an adept saxophonist, changes that with an intense propel on soprano, his voice immersed in the intonation of the raga. Yet, there is that wider sphere for him to explore and he does that as he changes direction and brings in some swing. Kevin Turcotte (trumpet) is introspective as he essays the Indian motifs, comfortable in his exploration. When Kelly Jefferson (tenor sax) comes in, he hits the road of free invention after stamping his credentials on the theme.

Moksha is a quiet tune, in keeping with the Indian concept of the release of the soul from material bondage. Viswanathan grabs the emotion with sweet fervor with Anthony Michelli (drums and percussion) swishing a light rhythm that locks in nicely with Viswanathan's inventions on alto, and elevates the tune.

Turcotte sizzles on the bop turn of "Ahimsa. His interjections are sharp and pointed, opening the door for a swaggering run from Jefferson. The arrangement shifts into an ebb and flow. The shape is never static until David Braid (piano) captures it and creates an exquisite re-imaging of the Indian melody with his cohesive, harmonic play.

Far-East End Blues is a blues but the melody, again, is Indian. Once the head has been detailed by the band, Turcotte takes off on a bop trail with just a hint of smear to grease his journey. Rez Abbasi brings in a different tonality on the sitar-guitar. The instrument gives him the ability to play a run of notes on the guitar while bringing in the bend and sway of the sitar. Viswanathan swings with abandon, turning quick imaginative curves that blister and burn.

Viswanathan's explorations of the two worlds should give enough cause to rejoice.