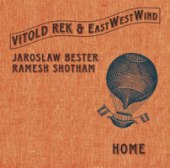 Vitold Rek first studied the double bass in Cracow playing classical music. A change came when he heard Ray Brown play and from there on jazz manifested itself in his compositions and he became part of trumpet player Tomasz Stanko's band. Rek made a significant contribution and was soon in the company of outstanding improvisers like Charlie Mariano, Albert Mangelsdorff, Karl Berger and John Tchicai. He recorded with all of them and went on to lead his own groups including EastWestWind.

Rek continues to use jazz harmonies in his music but he gives them greater depth with klezmer and folk music. The first EastWestWind album Live at the St. Ingbert Jazz Festival 1997, Germany (Taso Music Productions) featured a different line-up from the present one. Besides the usual instrumentation of saxophones, bass, trombone and drums it had Adrian Mears playing the didgeridoo. On this recording, Rek plays the mandolin and mandola, Ramesh Shotham adds a wide variety of Indian percussion instruments and Jaroslaw Bester deepens the coloration on the accordion.

Rek explores folk music on eight of the tracks basing his compositions on idioms from Greece, Scotland and Poland. There are two klezmer tunes one of which, "Di Saposkelekh is traditional, a composition by Shotham titled "Buzz Off and one by Bester called, quite simply, "Emotions. That's an eclectic mix and if interest is piqued, the CD certainly satisfies it in spades.

Rek combined two Scottish folk tunes to come up with "Scottish Scott. The resonance is deep as Rek bows his bass in tandem with Bester's accordion. Rek adds another beckoning when he plays the mandolin and lights up the reel, but it is his arco and the sway and swerve of his lines that give the tune its soul. The universal language of music is exemplified as Shotham plays the ghatam, his Indian rhythmic cycle fitting compactly into the groove of the arrangement.

Zbigi is a tribute to the great violin player Zbigniew Seifert. The composition has a deep, vibrant melody that rises form Rek's bow, heartfelt and churning. He then moves it across giving the composition another characteristic as he plucks the strings. Bester takes the accordion across the spectrum, his upper register evoking a sense of loss. It's a poignant tune, made all the more powerful by the trio.

Mr. La is a happy lark. Rek bows with abandon letting the melody stand up and sing, a skein that Bester takes up with delight. Add Shotham's heady percussive beat and this one says "get up and dance!

Rek and EastWestWind have created music that is riveting in its use of texture, dynamics and sonority for some great listening.