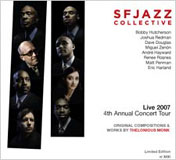 After releasing the outstanding double-disc Live 2006: 3rd Annual Concert Tour (SFJazz Records, 2006), the SFJazz Collective could have pulled up their laurels and rested for a spell. Instead, the eight-piece super-band has punched out Live 2007: 4th Annual Concert Tour, another two-disc set that is a fine portrait of a group ably navigating transition.

Thelonious Monk gets the star treatment that Herbie Hancock received on 2006, with three significant differences.

First, while Hancock shared Miles Davis' exploratory nature, Monk preferred to make a statement and move on; although the Collective does expand on their choices from Monk's catalog (including legendary works like "Epistrophy and "Crepuscule with Nellie ). The expansions maintain Monk's brevity and intimacy. You get more Monk—thirteen pieces in all—including altoist Miguel Zenon's delightful samba mash-up, "San Francisco Holiday/Worry Later —with more room to move and plenty of the blues-based attack that was a Monk trademark. Bobby Hutcherson's muscular vibes establish this mindset on the opener, "Brilliant Corners.

Second, where the Hancock material received loving arrangements by Gil Goldstein, the Monk compositions here are all adapted by Collective members. The results are more personal, with no drop-off in quality. You still get the unique flourishes that made Monk's listeners whisper, "What did he just play? But unlike Memories of T (Concord, 2006)—where Ben Riley's septet became the piano—the Collective maintains its identity while paying respectful tribute. There's a real sense of fearlessness in both the arrangements and the performances, especially saxophonist Joshua Redman's passionate take on "Bye-Ya.

Third, on 2006, the Hancock material shared set space with Collective originals; on 2007, Monk's music gets a disc all its own. While only two of the Monk tracks go over five-plus minutes in length, all the originals are long-form explorations, culminating with trumpeter Dave Douglas' intense eighteen-minute, three-movement "San Francisco Suite. Also, the new material on 2006 shared Hancock's love of the pastoral, so they dovetailed easily. The 2007 originals are phenomenal, to be sure, but pairing them with the Monk tracks would be like an art gallery showing watercolors next to crime scene photos.

Douglas has been working hard to be "just another guy in the band —first on pianist Kenny Werner's Lawn Chair Society (Blue Note, 2007), and now with the Collective. Where Lawn Chair was right in Douglas' contemporary electric wheelhouse, the Collective is decidedly old school acoustic. Incapable of being a fish out of water, Douglas jumps in with both feet. His writing is as challenging as ever, and he teams with trombonist Andre Hayward to bring even more energy to one of jazz's best front lines.

Douglas is just part of a transition which includes Redman's departure as the group's artistic director. Saxophonist Joe Lovano has the gig now, which should surely shake things up. Still, Live 2007: 4th Annual Concert Tour reflects the spirit of Monk, who liked things shaken and stirred, and strove to keep moving forward. Live 2007 is another triumph for the SFJazz Collective, whose musical journey just keeps getting better.