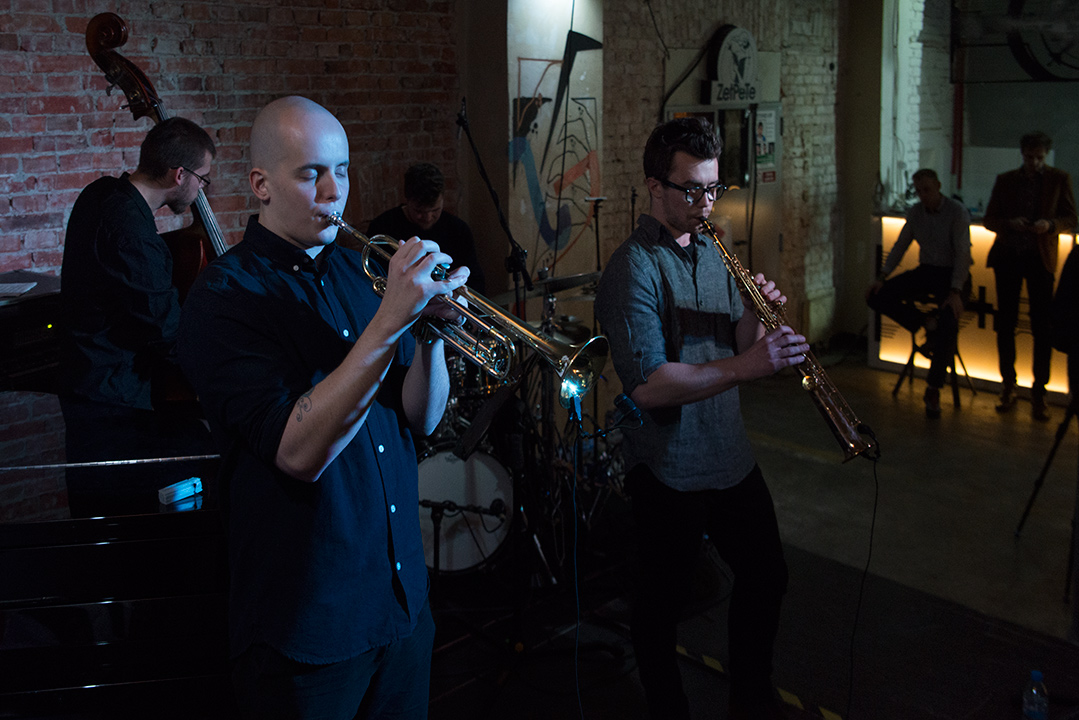 The four-day Hitch On Festival in Kraków is divided into two sections: separate runs for competition and showcase performances, both under the banner of the Jazz Juniors International Exchange. This doesn't entail a ridiculously stripling orientation, as most of the artists involved are already quite advanced in their playing abilities, and some bands are already experienced touring outfits. Indeed, the showcase sequence tends to involve artists who are more seasoned, when compared with the bands in competition. The majority of these bands are Polish, or at least feature indigenous players in multi-nationality line-ups, but the showcase acts are sometimes drawn from further afield. The upper artist age limit for the competition part of the programme is 25 years.

The festival (or more precisely, the competition) is 40 years old, but has doubtless changed its character steadily, down the decades. The advance selection jury included trumpeter Dave Douglas and bassist Lars Danielsson. Much of the organisational work of the festival is divided between director Tomasz Handzlik and pianist-programmer Pawel Kaczmarczyk, leading a very efficient team who manage to corral a large number of performers into place, beginning on time, and not overrunning their sets, in a programme that's quite tightly arranged. Next year, the festival will expand its name to Hitch On Music Exchange, aiming for an even more international scope.

A different pair of the competition acts played at 4.30pm, for three days, in the Zet P Te arts venue's frontal café bar (its name derived from the Polish for Tobacco Processing Plant, this Old Town space's former incarnation). It's situated in an area that's entirely devoted to restaurants, cafés, and a prodigiously stocked craft ale bar, all of these in converted premises, still boasting the distressed exteriors of their pasts. One or two of the bands might have veered too close to bland pop, or romantically formal jazz, but there were several real contenders here, offering some varied stylistic tendencies...

Organic Noises displayed a central influence of Armenian folk music, with Zofia Trystula-Hovhannisyan specialising in traditional blown instruments the duduk and zurna, along with the more common oboe. The rest of the sextet played violin, keyboards, guitar, bass and drums, ending up with a folk-rock-jazz fusion. Their sound could be described as Eastern Fairport, but slanted a touch more towards progressive rock, once guitarist Robert Wiercioch opened up his solo (each band tended to play only three numbers, not stepping over the 30 minute threshold). Joanna Chudyba offered a deeply resonant, chorused violin solo, as Armenian folk slipped towards the native Polish tradition, via a Krzysztof Komeda theme. As their third song struck, the Organic Noises emphasis tilted yet again, this time towards a straighter, bordering-on-metal sound.

The Vibe Quartet featured (we guessed it) a vibraphone, as played by Michal Puchowksi, partnered by the expected piano, bass and drums. They hail from the city of Katowice. A loungecore opening tumbled into a vibes-and-drums duet, and considering the tight demands of a competitive display, drifted for perhaps too much of its length. Even though it was an enjoyable drift. This foursome digs the breakdown into sparseness, following up with a bass-and-drums interlude, as a hesitant curiosity for texture and tone developed. The peak of the Vibe Quartet set arrived with a bluesy piano solo, much like the rolling outbreaks so beloved of Brad Mehldau in recent years, as that pianist has funked up his standards songbook. This made a fine conclusion to this set by one of the competition's highlight combos.

The Jan Kartner Quartet featured their composer-leader on alto and soprano saxophones, along with trumpet, bass and drums. Bluesy and funky though the opening composition was, this Wroclaw crew expanded to a crawling dirge for their second piece, highlighting Kartner's soprano. The third tune rang with a darting thematic chase, alternating with a plodding bass interlude, all in the 1960s art-jazz style. A dramatic drawling ensued, with alto crying and wailing, like a funkified Ornette Coleman, his 1980s sound transposed onto a 1960s template, whilst the drums clattered out with a constantly exciting emphasis. This band was your scribe's choice for the competition winners, though sadly, such an achievement was not lying on reality's horizon.

The last outfit in competition were Quantum Trio, cleverly stepping aside from the oft-chosen orientation, instead matching piano and drums with saxophone. Most of the acts in competition have been formed during the last year or two, but this threesome came together in Rotterdam, 2012. The line-up combines a pair of Poles with a Chilean. They were a tad mechanically clever, nay robotic, at times, but their performance was greased by virtuoso abilities. Seemingly obsessed with hard-paced time swerves and scientific precision, they lacked in the area of organic feel. It was puzzling that the Quantums chose a very lengthy drum solo for the limited time allotted, but the good news was that this happened in the setting of their best work on display, "Entropy," a powered charge with a recurring Balkanoid stutter-theme, which became increasingly compulsive each time it hoved forth.

The evening showcases (7.30pm) had a slightly different home, this time in the larger back room of Zet Pe Te, darker for increased atmosphere. There were eight acts performing over the two nights of showcase sets, four per evening.

The Kamil Piotrowicz Sextet had bass and drums twinned for sharp stab-tattoos, with crisply enunciated horn lines from their trumpet and two saxophones. The Sextet's pianist-composer leader operated in the freedom zone, working around his slinking themes, the instrument's interior becoming prepared for "Popular Music" (the title of their recent album), prior to the re-entry of the tripled chaos horns. Shockingly, after a brief moment of silence, the bassist and tenor saxophonist switched tools, to rend the night air with harsh electronic eruptions, in the old school Stockhausen vein. This was a truly revolutionary act, and completely unexpected, presaging a phase of ultra-minimalism, with bass singing high like a cello, a skipping, rotary drum solo capping off their "Cobra Blues."

The Tomasz Chyla Quintet had an atypical orientation, devoted to a hard-assed folk-jazz fusion, dominated by the swooping and sawing violin of its exuberant leader. They opened with a folk song from the Kashubian region, led by Chyla's raw violin and Piotr Checki's lusty tenor saxophone. Next came an original work, with tension encouraged via an electronics-topped piano, holding a very varied palette, heading from lyrical swathes down to darkened blobbiness. A dervish dash highlighted another tenor solo, pushing to the very edges, and then riding back towards the governing theme.

Another festival highlight was provided by the Wójcinski/Szmanda Quartet, which includes three brothers and a bonus non-sibling member. This band might be the most experienced of the entire Hitch On, with a substantial playing history together. They are immersed in the hardcore improvising method, though not without returning themes and phrases. They encouraged an open sensitivity and calm, particularly in relation to all of the other bands on show. A luminous subtlety walked gruffly, with peppery stalactite trumpet falling onto an insistent piano vamp, steadily intensifying, with drumming punctuations and lowdown bass pulsing.

When the competition and showcase sets concluded, there was the more relaxed late night ambiance of the Harris Piano Bar, a lively basement den, right on the edge of the city's main square. These sets were straightforwardly divested of any competition or showcase responsibilities, 'merely' bent on creating a strong aura of groove, swing, stepping or funking, with two sets topped by a jam session, heading late into the night.

The NSI Quartet, together since 2012, operated a horn front line of trumpet and either alto or soprano saxophone, with bass and drums lurking tough to the rear. An overblowing Bartlomiej Prucnal held steady, whilst Cyprian Baszynski speckled trumpet on the run, both players weaving with quicksilver intensity. They opened a number with just soprano and trumpet, darting and minnowing before the bass and drums entered, bringing a complex funk into play. Later, as the jam session developed, it was virtually the same core band members that were central to the proceedings, but this was more due to a shortage of late night midweek participants than any egotistical desire for the quartet to dominate.

For the final night's afterparty, the Kraków funk/jazz/hip-hop collective Gadabit played an extended set at Harris, possessed of slippery groove, but also packed with fast-tongued raps, courtesy of freestyler IND and Kuban, his co-rapper and percussionist. They were supported by a full live band, with violinist, sampler, keyboardist, bassist and drummer, their set followed by a jam that was more akin to an expanded band session, with existing numbers augmented by guest musicians. Gadabit were a wise choice to spearhead the blow-out party vibe, their sets fuelled with a tangible momentum, phrasing skill, enthusiasm and humour. If your scribe could lift the Polish dictionary, it's very possible that the raps themselves were thoughtful and amusing. Judging by the audience reaction, this seemed to be the case.

Earlier in the evening, the Gala Concert at Radio Kraków gradually revealed the competition results, and also bestowed prizes on many of the showcase artists. Hitch On is a contest that deems it valuable to give credit across the range, and even though the main competition prizes involve cash awards (for recording expenses), there are a prodigious number of accompanying rewards for showcase acts, principally involving gigs at other upcoming festivals, both around the globe and in Poland itself. Partly a tense ceremony, the concert became more relaxed once the results had been announced, and three of the selected bands could devote themselves to the business of entertaining the audience, perhaps in a more free-wheelin' fashion than when they were cooking under the spotlighted gaze of the judges.

It was a fine closing concert, with Quantum Trio grasping the main cash prize, and the Vibe Quartet arriving second, also securing a recording session and a prestigious Polish gig. Each of these combos delivered a set, with both of these being superior to their performances a day or two earlier. The Wójcinski/Szmanda Quartet also played, once again to a very high standard of cliff-hanging, sensitised improvisation, having just been awarded a pair of gigs for 2018, in Serbia and Poland.

It was a dire development indeed that your scribe's favoured band in competition, the Jan Kartner Quartet, received no formal acknowledgement from the judging team whatsoever...