By Jack Bowers
February 5, 2022
Sign in to view read count 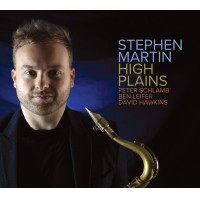 Every so often, Missouri-bred saxophonist Stephen Martin bears witness to his main man, the late John Coltrane. But, for the most part, he is his own man on his second album as a leader, blowing hot, cool and earnestly on the quartet date, High Plains. Martin's disposition is decidedly contemporary, as he shows whether playing alone or with his special guests, alto saxophonist Bobby Watson (on Benny Golson's "Stablemates") or tenor saxophonist Matt Otto (on Otto's "Euphony"), two of the album's several highlights.

Another is Joe Henderson's light-hearted "Punjab," on which Martin, vibraphonist Peter Schlamb and bassist Ben Leifer carve out especially engaging solos while Leifer and drummer David Hawkins lend their deft touch to the rhythm. Everyone is aggressive on the close-knit, fast-moving "Euphony," which precedes the vigorous finale, Frank Foster's "Simone." Schlamb is at the keyboard for that one, as he is on the album's opening three numbers, before moving to the vibraphone for "Stablemates," "High Plains," "Punjab" and "Euphony." While he is splendid on either instrument, the vibraphone takes pride of place here owing to deftness and clarity.

The album opens with Leifer's warm, introspective "Horizons," on which Martin's tenor saxophone readily captures and reflects its even-tempered mood, before moving to Martin's "The Void" and the standard "Easy Living," both of which, Andrew Stinson writes in the liner notes, were inspired by Coltrane recordings from the '60s, "Chim Chim Cheree" and "I Want to Talk About You." Even though Martin gives them a fresh coat of paint, the ghost of Trane is ever-present. Elsewhere, Watson is always a pleasure to hear, as he proves again on "Stablemates," taken at exactly the proper tempo, with Schlamb providing counterpoint on the vibes and Martin chipping in with a pleasing solo of his own. "Euphony" is a rhythmic delight, with keen statements by Otto, Schlamb and Martin setting the pace while Leifer and Hawkins lend their stamina to the task at hand and Hawkins adds a muscular solo to the mix.

Martin leads a bright and capable ensemble, and the expertise of Watson and Otto provides further spark. In sum, these High Plains (with apologies to Clint Eastwood) are well worth drifting through.