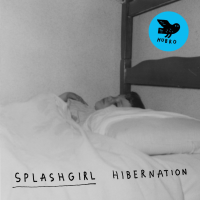 For Hibernation, their fifth Hubro release, Splashgirl retain some of the characteristics that made their recent albums successful, while curtailing others and moving forward into new territory. This album was produced by the renowned American Randall Dunn—producer of Oren Ambarchi, Earth, Six Organs of Admittance, Sunn O)))—who mixed Splashgirl's breakthrough 2011 album Pressure and then successfully produced their last one, Field Day Rituals.

Where Pressure featured five guest artists alongside the core trio of Splashgirl, Field Day Rituals had cut that down to two, but now Hibernation only has one—the Seattle-based Skerik on saxophones and electronics. The saxophone does not figure as a solo instrument but in the ensemble, adding sufficient depth and colour to the sound to justify a repeat invitation next time around.

Compared to their last two albums, this one finds the three members of Splashgirl making far greater use of synthesisers, electronics and processing to enhance and embellish their soundscapes and take them far beyond their past work. With the credits name-checking synths such as the Arp Solina, Korg Delta, Prophet 5, mini Moog and Jupiter 6, aficionados of synth history have a treat in store!

Not for the first time, Hubro describes Splashgirl as a "doom jazz" trio; anyone unsure of the meaning of that label (or the related "dark jazz") should listen to this album for a classic example. The trio's music is far removed from any style of solo-based jazz, free or otherwise, instead featuring deliberate, medium-paced, riff-based grooves that include all three players, with melodic lines from Andreas Stensland Løwe on piano and synths being a driving force. And, despite the labels, the music is not unduly doomy or dark, instead being consistently captivating and mesmerising. It evolves slowly, but it definitely evolves enough to maintain tension and interest, so preventing boredom setting in. Allied to that, none of the tracks outstays its welcome, with the longest—"Two Degrees""—clocking in under eight-and-a-half minutes, and the total running time for nine tracks just topping fifty-two minutes. Another fine album from Splashgirl; their successful run continues...