By Tom Greenland
October 7, 2008
Sign in to view read count 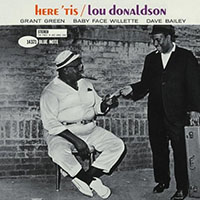 Alto saxophonist Lou Donaldson is one of a slew of hornmen to emerge from the long shadow of Charlie Parker, one whose distinctive bluesy sensibility eventually became a leading voice in the soul jazz movement. Here 'Tis (recorded in 1961), Donaldson's 14th session as a leader for Blue Note, is a standout release in his catalogue, a high midpoint along a stylistic transition that began with 1958's Blues Walk and would crystallize with 1967's Alligator Bogaloo.

Here 'Tis boasts a stellar supporting cast of Grant Green (guitar), Baby Face Willette (organ) and Dave Bailey (drums) in a vibrant workout over four 12-bar blues tunes and a cover of the Gershwin's "A Foggy Day." Donaldson's playing here contains the best of bop and blues aesthetics; unhurried, fluent, expressive and eminently swinging, his ideas unfold with a seemingly effortless mix of heart and intelligence. As Robert Levin aptly describes it in the original liner notes, "[I]f there is sometimes...a scent of the academy...there is also the vitality and conviction of insight."

Green, a fresh arrival on the New York scene at this point in his career, his talent in full flower, delivers solos that evince a masterful mix of space and density, stop and go. Willette is the emotional epicenter of the session, working the organ with a raw, undisciplined touch that pulls on the listener like a preacher's sermon, milking each phrase to its last emotive drop. While "A Foggy Day," Bird's "Cool Blues" and "Watusi Jump" are brisk swingers, showcasing the combo's driving verve, the title track and "Walk Wid Me" are moody dirges that would past muster with a down-home blues bar crowd.