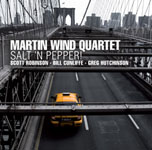 German-born bassist Martin Wind has had an extensive career as a sideman. His fourth CD as a leader (and third for Challenge) is his best effort to date, featuring pianist Bill Cunliffe, multi-instrumentalist Scott Robinson (who restricts himself to only three here) and drummer Greg Hutchinson.

Most of the CD focuses on Wind’s striking originals. “Remember Oct. 13th” salutes the birthday of the late great bassist Ray Brown, though its

unusual blending of arco bass with Robinson’s vocal-like bass clarinet nods in the direction of Eric Dolphy as well. The constantly shifting “Mr. Friesen” salutes the virtuoso cellist Eugene Friesen (a long time member of the Paul Winter Consort) and is another potent feature for Robinson’s bass clarinet, with Wind playing both pizzicato and arco, a post-bop vehicle with a Latin undercurrent. The intimate, impressionistic ballad “The Dream” showcases Cunliffe, Robinson (on tenor sax) and the leader, with a late shift into a bossa nova setting near its conclusion. The title of “The Cruise Blues” is a bit misleading, as it is a lush feature for Robinson, who seems to be channeling Stan Getz on his tenor.

Wind proves himself just as effective playing other’s songs. The bassist recasts “Bright Mississippi", Thelonious Monk’s playful reworking of “Sweet Georgia Brown," as a fun-filled calypso and the CD concludes with Wind’s spirit-filled rendition of Duke Ellington’s powerful “Come Sunday,” with Robinson incorporating a bit of alto saxophonist Johnny Hodges into his tenor solo. The one thing missing from this outstanding CD is explanatory liner notes.